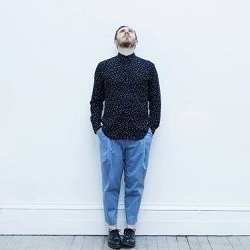 These were the most grueling 4 weeks of my life. Went out there with a hard drive full of ideas, all the parts played out and running through my head. But up till this point I’d literally never recorded anything in a proper studio. It overwhelmed me, the reality of writing playing and producing every single beat of an album like that in 4 weeks went from being totally abstract, to hitting me in the face like a ton of bricks.

Wouldn’t have gotten it finished without the man in this photo, Ross Dowling, he sat behind this computer from 8 in the morning until 2 at night every single day, nothing I threw at him was too much, it’s no exaggeration to say that album wouldn’t exist without him.