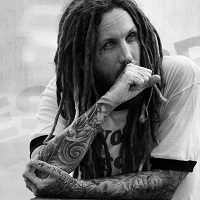 “It was 2005. I was fresh off of drugs, freshly awakened spiritually and feeling positive, yet I was truly alone for the first time in my adult life, away from my best friends I had grown up with and taken Korn to the top of the music world with. What an exhaustive whirlwind of emotions. I can’t even tell you.

“But there was also a deep cloud of sadness from a completely different source that was weighing heavily on my soul. Dimebag Darrel from Pantera had been murdered on stage in front of his brother, his other bandmates, his friends in the road crew and a club full of devoted fans. Only a few weeks had gone by and I just couldn’t shake the shock, confusion and sadness of how that could’ve happened. With Dime’s murder, my leaving Korn and my new spiritual life… I was dealing with a tornado of confused emotions to say the least.

“Only a few weeks after the murder, I remember sitting in my studio/office at home, just days after leaving Korn. I couldn’t stop thinking about Dime. So I picked up my guitar and wrote a piece of music in a style I had never written before. It all came so naturally and quickly. It was as if the pain over Dime’s tragedy came from deep down in my soul, out of my heart, through my veins, into my hands, out of my fingers, and poured into this little piece of music called LETTER TO DIMEBAG. I felt a release after I finished it. It was a surreal experience in my life and every time I listen to it I feel the same emotions I felt that very day I wrote it; like my soul crying out over the injustice done to Dime, having to let him go, and witnessing a part of Dime’s closest family and friends die right along with him—especially his brother Vinnie. Vinnie was never the same after that.

“After the recent and sudden passing of Vinnie Paul, I wanted to post this again as they have both been on my mind and heart so much lately. So I dedicate this track to Dimebag Darrel and Vinnie Paul.