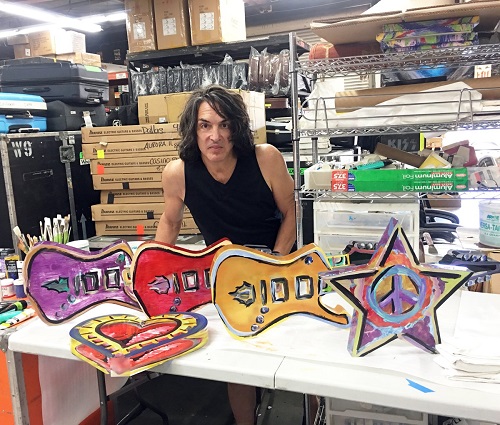 LIVE AND CRUSHING IT tonight was the greatest way to announce the END OF THE ROAD. This last tour will be our BIGGEST & MOST EXPLOSIVE show ever to thank you all and say goodbye. We will make every night unforgettable for everyone. My gratitude to all. @AGT

KISS frontman Paul Stanley stopped by CNBC’s Squawk Box today to talk about his latest art tour.  During the chat, Stanley revealed that a major KISS tour would be launching at the end of January 2019.

“It hasn’t been announced yet. So, don’t tell anybody,” he joked.

It may be worth noting that KISS bassist Gene Simmons recently told Chicago’s Sun Times that a farewell tour might be coming soon.  In addition, a couple of months ago, a US trademark application had been made under the band’s name for the phrase “The End Of The Road.”

Stanley creates portraits and abstracts that can be associated with the Abstract Expressionists of the late 1940s and 1950s. You can view some of his pieces, via our previous post, at this location.

After 45 years of rocking the world it all comes down to this. Our final tour ever.
The KISS #EndOfTheRoad World Tour presale begins tomorrow at 10am local. For dates, ticket & VIP info visit https://t.co/30hEXotp1I pic.twitter.com/mfHxMuhKya