Dio/Black Sabbath Drummer Vinny Appice on Carmine’s Warning About Joining Ozzy’s Band: “Ozzy was passed out in his plate of spaghetti” – 2022

VWMusic: We recently caught up with drummer Vinny Appice. We talk Sabbath, Dio, and more. You can read the entire interview @ this location.

Now, if I remember correctly, earlier in the year, there were a whole lot of different rumors going around regarding you being offered a role with Ozzy Osbourne, and you ultimately turned it down. Can you clarify that for me? 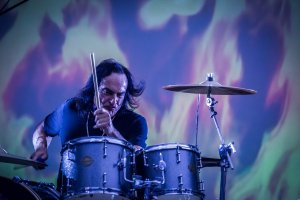 I got a call from Sharon Osborne, and she told me, “We’re putting a band together around Ozzy. Right now, Ozzy is in England, and he heard about you. We’re willing to fly you to England, and have you hang out with Ozzy.” Basically, they wanted to see how I got along with him, and the guys, and if it would work. The thing is, I was really young. I was probably nineteen, or twenty years old, and I had heard crazy stories about Ozzy, God bless him. [Laughs].

So, I asked my brother, and I said, “Carmine, I got an offer to go play with Ozzy in England. What do you think?” Well, Carmine said, “Yeah, I confirm that he’s pretty crazy.” Carmine went on to tell me some stories, and basically, he said, “The last time I was with him, we were at the Rainbow Bar and Grill in Hollywood, and we were having a drink and eating. Someone called me, and I turned my head, well, when I turned back around, Ozzy was passed out in his plate of spaghetti.” So, I was like, “Okay. Maybe I shouldn’t do this.” [Laughs]. It’s so hard to remember, but those are the main reasons that I didn’t take that offer.

But then, luckily, a couple of months later, I got an offer from Sabbath while they were in L.A. They needed a drummer right away. So I went down and met Tony Iommi, and it worked out really well. Tony and I got along great, and he invited me down the next day to play with the band, and see how it goes.

I remember they only had like four total days before the tour picked up again because Bill Ward had just quit during the Heaven and Hell world tour. So, it worked out good, and then my relationship with Ronnie was incredible. We got along so well, we became like brothers and that led to Dio down the road. It’s crazy to think about now, but me passing on the Ozzy gig, it was a good move in that way. That was a good move for me, for a lot of reasons. But either way, Ozzy lasted a long time too. His career was on top forever. It still is, you know?

Could you have ever imagined that Holy Diver would become one of the definitive albums in all of rock history?

Yeah, no, we never thought that. [Laughs]. As a matter of fact, I just got the award for Holy Diver going double platinum. It went double platinum this year, so it’s ironic, and I just got it a couple of days ago. It’s beautiful, and that was like a really special thing for me because that’s something that we started from scratch. 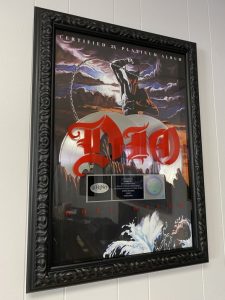 When we did that album, we used to go into Sound City Studios at night around 7 pm, and that’s when we’d rehearse, and smoke a lot of pot. [Laughs]. It was like a hangout for us. We had the band there, and some of our friends would come down and hang out too. It was like a little party each night, and it was a really good time. We actually would look forward to going there each night, and that good energy was really reflected in some good songwriting, and some good songs being put together.

We did some crazy, crazy things there at Sound City, man. I mean, they let us do anything we wanted. We had it blocked out for like six weeks, and we destroyed all the candy machines, we would just bang on them and get candy if we were hungry. We broke all of them, and then, with all the pinball games, we opened them up too, so we couldn’t lose the ball. I mean, we did all this crazy shit like punch holes in the wall and stuff. [Laughs]. We were just doing what came naturally, and we just played really well together. We had Vivian Campbell on guitar and Jimmy Bain on bass, Ronnie and I, and then Angelo Arcuri, who recorded the first four Dio records, he was there too. He was my best friend, and he was the sound man for Sabbath at one point. It was like a hangout for our gang of friends and the band.

I remember when we went into the studio, what we did was we wrote four songs, and then we took all the gear right across the parking lot into the Sound City Studio. It was like a complex, and we just picked up the drums and cymbals – everything’s on the stand, there was no breaking it down – and we just carried it in, including Ronnie. [Laughs]. We carried all of that stuff in, so we could get set up, and record the four songs, work on them, and finish them. Then, we would go back to the rehearsal space and write four more. And that’s how we did Holy Diver.

It was just a great time, with everybody having so much fun, and as Ronnie would say, “It was magic.” That magic we went in with, that made for a great album. And then when we started to mix it in the studio, my drum tech turned to me, and he says, “Holy shit. This is going to go platinum,” and I’m like, “Yeah, right.” Honestly, we had no idea. We just thought we were making a good record, and then it came out and it was just amazing.

It really amazed us how it became so important in rock history. Even today, that album, it’s like the cornerstone of rock. When it came out, it sold and sold, and then it went platinum back then, and now to see it go double platinum, that’s pretty cool. It was just a moment in time when everything fell into place. Everything was right. Everything was loose. Everything was cool. It was a window of writing some great songs and having a great time.

There’s a lot more to go. You can read the entire interview @ this location.

Previous: KISS’s Gene Simmons on Jurassic World: Dominion: Michael Crichton created it and gave me my 1st movie role in Runaway – 2022
Next: Guitarist Steve Vai, “Opinionated news is the enemy” – 2022