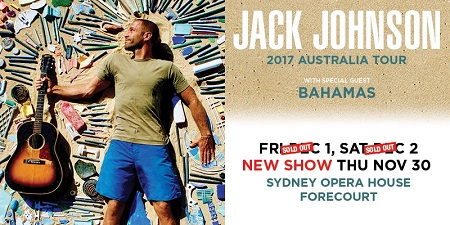 Due to popular demand Jack Johnson has added a 3rd show at the Sydney Opera House’s Forecourt on the November 30th.  Johnson will now play on November 30th, December 1st & 2nd.

Johnson released his seventh studio album, All The Light Above It Too, on September 8th through Brushfire Records. The album was recorded over the past year at Jack’s Mango Tree Studio in Hawaii. For the first time in years, Johnson handled most of the instrumentation himself, echoing the four-track recordings that launched his career over 17 years ago. The track “Sunsets for Somebody Else” has been embedded below.

Sydney Opera House’s Forecourt is one of the world’s most spectacular outdoor performance spaces and offers the largest capacity of any Opera House venue. Set below the famous white sails and the granite Monumental Steps, the Forecourt offers patrons harbour and city views.