Dee Snider Responds to Twisted Sister Fan Who Got Stiffed on a Signed ‘Stay Hungry’ LP in 1984: “You definitely are owed something” – 2022 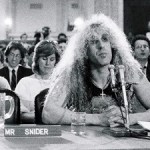 All right, I read your tale of woe (worse than the Ovaltine Secret Decoder Ring in Christmas Story!) & you definitely are owed something signed from Twisted Sister! You may have aged out, but if you still want it, DM me your address & I’ll get you something! 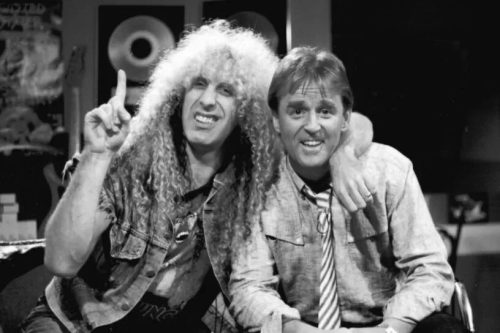 THE BACK STORY – “The Tale of Woe” 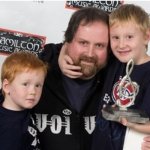 Sean Palmerston : I was in grade eight in 1984. I was twelve years old, and I was just starting to get really into music. Iron Maiden was my favorite band, my friend Kevin Murphy and I were Maiden obsessed already and would shortly discover even more extreme, underground bands through labels like Banzai, Viper and Diabolic Force.

There weren’t a lot of outlets for discovering metal music in a small town like Simcoe, ON. We had to rely on the television and music videos because there was no local radio playing the bands we liked. Wednesday afternoons was Midweek Metal Mania on the Toronto Rocks program on CITY TV, as well as Much Music (although I don’t even know if that was on the air yet). We couldn’t get CITY TV or Much Music at my house, as we only had a TV antenna, but Kevin used to record videos on his VCR and that is how I saw most of them. Except the very few they showed on the Friday night double shot of Good Rockin Tonight on CFPL London (CBC) and Friday Night Videos on WICU Erie (NBC).

I stayed up late every Friday night for those two programs and, shortly after Iron Maiden released Powerslave, there was a lot of Iron Maiden coverage on GRT. Terry David Mulligan was the man in my eyes because he played stuff like Maiden, Twisted Sister, Triumph, etc.

When Maiden and Twisted Sister did a cross Canada tour, GRT had contests on two consecutive episodes to win stuff from both bands. Kevin and I were so psyched, and we both mailed away our answers to the trivia questions – What was the only Iron Maiden cover released and who did it originally (“Women In Uniform” by Skyhooks) and what was the name of the first Twisted Sister album (Under The Blade). I entered for both of them, praying that I would win one of the Powerslave LPs signed by Iron Maiden, but I’d happily take one of the signed Twisted Sister ‘Stay Hungry’ LPs in a flash.

Fast forward a couple of weeks to when they announced the Iron Maiden contest winners and…. Nothing. Nada. My world was crushed. My dreams of owning something autographed by the band I considered the greatest musical entity of all time was not to be. But then something exciting happened that I was not expecting.

When they announced the winners of the Twisted Sister contest, I expected the same outcome. After all, there had to have been tens of thousands of rabid heavy metal teenagers across our fine land that I was competing against. How could a gangly twelve-year-old from Norfolk County win such a prize? But I did.

I was watching by myself in my parent’s basement when they announced the 20 winners, with their names displayed ticker tape style across the bottom of the screen and there it was, in the seventeenth position of twenty: Sean Palmerston, Simcoe ON – and it was #17, my lucky number to boot!

I was elated, so excited to win an autographed Twisted Sister LP! I had no one I could share the news with, it was like 12:20 in the morning and my parents and sister were long asleep. It was too late to call Kevin, so I had to keep the news to myself until the next day.

It was a tough wait for the next two weeks until my big prize-winning package was going to arrive, but I rushed home from grade school every day hoping it would be there already. I never got anything in the mail those days, except the odd, rare occasion when my grandma would send my mum copies of their local Scottish hometown paper, the Lennox Herald, and would throw in a few Judge Dredd or Oor Wullie comics for me. I looked every day for a box big enough to hold a vinyl LP that Dee Snider himself would have signed. 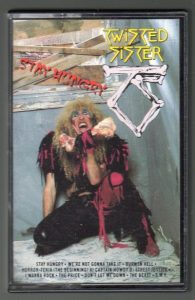 And then one day it arrived. It was the most disappointing day of my life.

While I was expecting a huge box, instead I got a small jiffy pack envelope that was partially torn open already. It was way too small to hold an LP, maybe it had a signed cassette in it instead? That would still be okay, I had a cheap Lloyd’s portable auto-reverse tape Walkman and only owned about three tapes at the time – Black Sabbath’s Paranoid, Def Leppard’s High and Dry and Queen’s A Day at the Races – so it would be a good addition, especially with Dee Snider, Jay Jay French and co. signing it to me.

Instead of getting a signed tape, the package contained a sealed copy of Stay Hungry on cassette, a note that said, “Congrats Sean – TDM” and a signed Good Rockin Tonight promo 8 by 10 picture of Terry David Mulligan in the GRT studio that was probably a stamped signature.

I am pretty sure I threw out the photo and gave away the tape to someone in my grade 8 class at St. Joseph’s School and I put it behind me. For years I felt like Terry David Mulligan let me down until I started working in the music industry myself and realized that some publicist probably promised the show producers one thing to do the contest but then ended up sending them something else. “Sure, we can get you 20 signed LPs to do the contest, no problem!” “Oh, sorry, we couldn’t get the band to sign 20, so here’s 6 signed LPs and a bunch of tapes – thanks for doing the contest!”

Terry David Mulligan, I forgive you. I know it’s not your fault. I loved spending an hour with you every Friday night on the CBC in my early teenage years. Please know the show was never the same after you left and Stu something replaced you.

I turned 50 this year. My parents assumed my music obsession was a phase I’d grow out of. Instead, I spent 17 years of my adult life working for record labels like Relapse Records, Sonic Unyon, Hydra Head, Nuclear Blast, Sensory/The Laser’s Edge and Goodfellow Records, amongst others, that all released albums by metal/hardcore/noise rock bands. For the past twelve years I have managed Sacrifice, whose original manager would have turned 60 today (RIP Black Metal Ray Wallace). In October, I will go see Iron Maiden for the 14th time in my life. The last time I saw them I got to take my two kids to see them and Ghost. It was a personal highlight of my parenting life.

If you got this far, thanks for reading my rambles. And thanks to Kevin’s brother Robbie James for reminding me about this again randomly some 38 years later!

Photo of Dee Snider and TDM by Ken Gibson, CBC.

I got his address, and I am on it.

I didn’t mean age out of the music, I meant of getting something autographed. Had to ask, I didn’t want to assume. https://t.co/AKrUJqugzG

OH MY GOD! That happened to me, too, but with a @MotleyCrue competition. I wrote the answer on a bed sheet and sent it in. I saw my name scroll at the bottom of the screen. A dang cassette, still sealed in plastic, arrived a couple of weeks later. I almost threw it onto the road.

This is an awesome story esp since the outcome is Dee not only read it but is going to send you something!

Dee you are such a cool guy!

Now? Who was ever cooler? Maybe that guy that gives away money, but other than him?

Stand up dude, in a world filled with nasty and bullshit, it’s awesome as hell to see a good guy… pic.twitter.com/bq7PV9uRvR