Iron & Wine: “When I sit down to write a song, I want to make something that lasts” 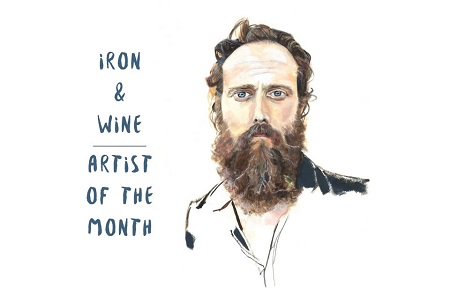 With his new album, Beast Epic (his first since returning to Sub Pop), >Beam has hit upon more than a few realizations, least of which is that his voice isn’t so much limited as it is abiding by its own restrictions. Call it a glass half-full perspective. “It’s really only comfortable in certain types of things,” he quietly explains. “You can do anything around my voice, but it’s kind of this elemental force. Not to toot my own horn or anything, but it’s grumpy; it doesn’t want to move. That’s something I learned to stop fighting and enjoy.”

As assured as his voice now sounds, the songs on Beast Epic pang forth with questions. Getting older has brought perspective and wisdom and all those traits that supposedly come with age, but there’s still room to screw up, and Beam remains almost painfully aware of that potential across the album’s 11 tracks. “You never stop learning. You never stop fucking up. You never stop wanting,” he says. The album looks at mistakes both committed and experienced, wondering aloud about the forces that bring people together and push them apart again. “It’s a middle age kind of record, where you’re still surprised to be dealing with the same things in life — getting hit with the same blows and, also, finding the same hope around the corner,” he explains. “[The songs] are unprotected and a bit fragile, but also broken, but also hopeful, looking to be redeemed, which I think is important. Looking to do the right thing, or looking for what the right thing is.”

That Beast Epic sounds closer to earlier Iron & Wine fare is the circuitous route result of marrying his earlier hushed-whisper stylings with the full band arrangements he began exploring in The Shepherd’s Dog. Then, too, there’s the touch of whimsy that distinguishes his latest effort. Working with Hoop allowed Beam to tap into his playful side. To put it mildly, he’s got a wicked sense of humor, but that doesn’t surface throughout his lyricism so much as through his persona on stage. When Beam and Hoop toured together for Love Letters for Fire, their witty repartee interspersed the affective affair with a much-needed comedic release. But he hasn’t found a way to inject that sense of levity into his often-brooding lyricism. “Beyond the music, I feel like the jokes are part of my everyday, and they come and go,” he says. “When I sit down to write a song, I want to make something that lasts. Even if it’s off the cuff, I want it to be that you can’t laugh off. Maybe it’s because I find it easy to laugh everything off.” He pauses, before adding, “It’s so strange because there are so many songwriters that I like that are really funny, but for some reason it doesn’t play into what I do.”