Listen to the new track “The Seven”, taken from Primus’ new album The Desaturating Seven, out September 29. The forthcoming effort will mark the first time, since 1995’s Tales From The Punchbowl, to feature the band’s original lineup.

The dark imagery and beauty of the art struck me immediately and I thought, ‘this would make good fodder for a piece of music.’ The use of color and darkness both in the paintings and the writing was compelling and now, near two decades later, the metaphor of greed, gluttony and deceit vs unity of the masses is eerily relevant. I brought the notion to the Primus guys and they were all for it. Plus, I figured it’s about time someone brought ‘Goblin Rock’ back to the fold.” 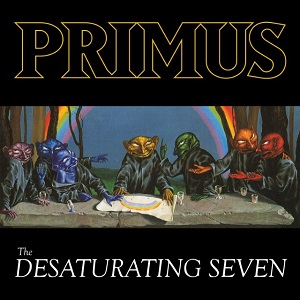