Thrash-metal stalwarts HAVOK are on the verge of releasing their new studio album, Conformicide. The Denver, Colorado-based group will unleash their fourth full-length record on March 10th, 2017 via Century Media.  Conformicide is the follow up to the band’s 2013 effort, Unnatural Selection. 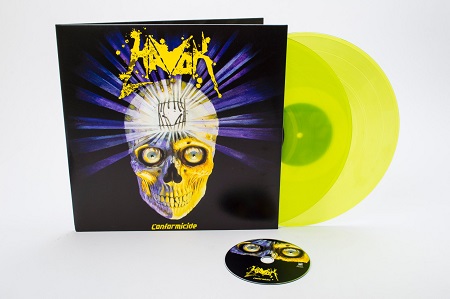 Order your gatefold deluxe double LP on neon yellow vinyl at this location. – (almost out of stock)

You can pre-order the cd / digital / vinyl on Amazon.

“Conformicide is our most dynamic, heavy, thoughtful, musical, and sonically-crushing album so far. All four members feel that this is the best Havok album to date. There are a lot of “truth bombs” being dropped on this record and the music absolutely rips!”
David Sanchez (Lead Vocals, Rhythm Guitar)

“This album swings for the fences in every way. Sonically stunning, technically proficient and lyrically pissed, we’ve never been represented at our best until this moment in time. We cannot wait for the world to react to Conformicide.”
Reece Scruggs (Lead Guitar)

Three years in the making, Havok’s Conformicide is undoubtedly their Master of Puppets or Rust in Peace moment. Previous albums include Unnatural Selection (2013), Time is Up (2011), and Burn (2009), but none of them compare to Conformicide.

‘Conformicide is faster and way angrier than Unnatural Selection,’ says vocalist/guitarist/founding member David Sanchez. ‘On this album, the music is very layered and dynamic and the lyrics say a lot about the current state of the world.‘”