Greta Van Fleet added a second show at the Troubadour in West Hollywood, CA on Oct 29th. Tickets go on sale this Friday (9/1) at 10AM PDT and can be purchased at this location.

The group dropped their first studio EP, Black Smoke Rising, on April 21, 2017 via Republic Records. The song “Highway Tune” was released as the first single (located above)…and you thought the days of ‘early’ Robert Plant-esque vocals were a thing of the past…so did I.

The EP was recorded at Rustbelt Studios in Royal Oak, Michigan. Black Smoke Rising is planned to be the first of three EPs that will eventually be compiled into an album once all have been released. 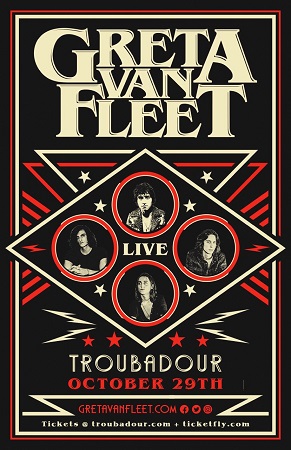