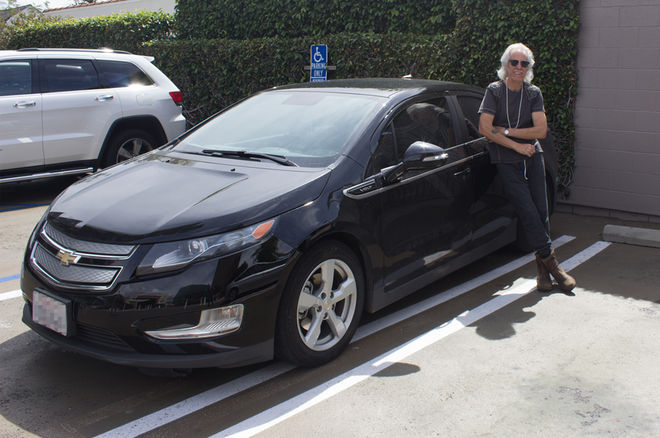 John Densmore, former drummer of the band The Doors, recently spoke with Motor Trend about his more mature car choices compared to his early rock star days. A few excerpts from the interview can be found below.

“I drive a Chevy Volt and a Ford C-Max plug-in hybrid, both rated at an eight because the fossil fuel industry is over,” Densmore says. “I like driving at least a part-time electric car because there’s nothing coming out of the tailpipe. That’s very important to me.”

For now, Densmore loves driving plug-in hybrids, but he’s always on the lookout for other environmentally friendly cars. “I’m probably going to move on to the Tesla when they get onto the [less expensive Model 3],” he says. “I can’t drive a 100k car to the market and scratch it. Just can’t do it.”

“When I was in my 20s I went through my testosterone phase and had a Mercedes to show that I’m rich, and they used to call me ‘Jaguar John,’” Densmore says. “I’m older now, and I’m concerned about the environment and … appreciate a car that doesn’t pollute.”

After having success with The Doors, Densmore bought a Jaguar XJ6, which was the first car he treated himself to. “I had the first XJ6 and then they became real popular with lawyers so I had to move on,” he says. “The only problem with Jaguar is that you have to go to the gas station every couple blocks, and a mechanic once told me that if you don’t have the right attitude when you walk up to a Jag, it won’t start.”

The Doors are celebrating their 50th anniversary this year by releasing The Doors – The Singles – Limited Edition [7″ Single Boxset]. The set comes with 20 replica U.S. singles, with original B-sides, on 7-inch vinyl 45s, meticulously reproduced cover art and labels, presented in an ornate, lift-top box. In addition, the box set also collects the rare single versions from all of the band’s landmark studio albums, plus other rarities from the era. For more info, please read our previous post at this location.