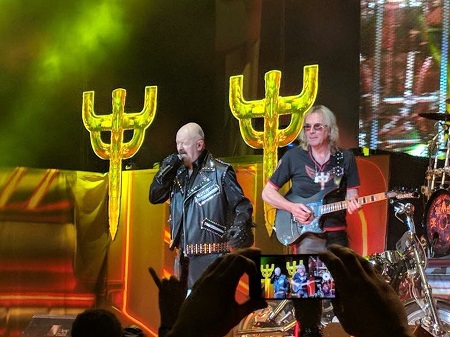 Glenn Tipton surprised fans at tonight’s Judas Priest concert (3/20) in Newark, NJ.  The guitarist joined the group during their encore to perform three Priest classics, “Metal Gods,“ “Breaking The Law” and “Living After Midnight.”  It was the first live performance with the band since publicly revealing that he has been battling Parkinson’s Disease.

GLENN TIPTON joins @judaspriest tonight in Jersey. Thanks to @Strigl @talkingmetal for the pics! pic.twitter.com/vKwdLisv4N

I was there. Obviously, Mitch has MUCH better photos. Emotional seeing the video during Painkiller so imagine everyone’s surprise when Glenn came out during Metal Gods. Rob watched over him like a big brother & kissed him on the cheek. Amazing show. pic.twitter.com/UJZrjag5XE

Thank you @judaspriest. Thank you Glenn Tipton! I look forward to seeing you all tomorrow at @SIRIUSXM! @RichieFaulkner @mr_scotttravis ? pic.twitter.com/K4iifH86y0

So good to have our brother Glenn onstage with us in Newark NJ. Glenn is the embodiment of strength and determination, and is an inspiration to us all. #judaspriest #glenntipton #firepower #firepowertour2018 @robhalfordlegacy @mr_scotttravis #ianhill @falconfaulkner @andysneap #soldout