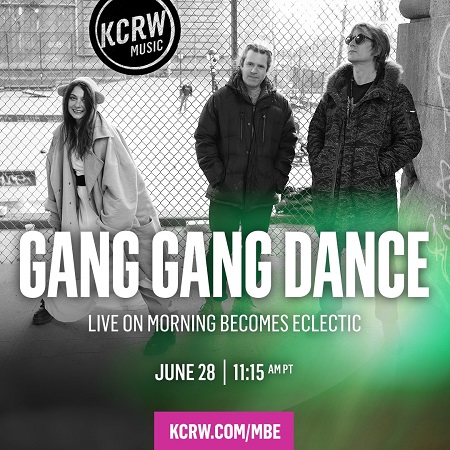 Gang Gang Dance will be performing live on KCRW’s ‘Morning Becomes Eclectic’ tomorrow (6/28) at 11:15am PT.  Listen to their live set at the KCRW basement studio at this location.

Gang Gang Dance will be promoting their latest album, Kazuashita, which was released on June 22, 2018.  The record is an intoxicating mix of shoegaze and electronic ambience, all held together by Lizzi Bougatsos and her otherworldly vocal. Bougatsos, alongside founding members Brian DeGraw and Josh Diamond, formed the group as an improvisational outfit in the early 2000s, and have consistently worked to blur the boundaries between music and art; as comfortable today performing at the Whitney Biennial as they are at Coachella, and count Dash Snow & Nate Lowman, Tinchy Stryder and the Boredoms as previous collaborators.