Frank Beard On Meeting Billy Gibbons For The 1st Time, “I was jacked up on speed” 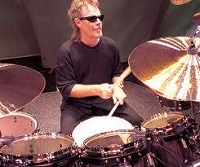 Frank Beard:  When I drove down to Houston, I hunted all over the place.  Found Billy Gibbons, made him go, I mean I just threatened him.  Made him go to the rehearsal studio and we jammed.  I was jacked up on speed, so I made him jam for like eight hours ’til his tongue just fell out. (transcribed by fullinbloom)

#ZZTopFilm (That Little Ol’ Band From Texas) screens in 43 theaters across 11 states for today only! Visit ZZTopfilm.com for tickets. #NowPlaying

"I made him jam for 8 hours until his tongue just fell out” – Frank Beard on playing with Billy for the first time. #ZZTopFilm screens in 43 theaters across 11 states for today only! Visit https://t.co/Do631FB5BU for tickets now. #NowPlaying pic.twitter.com/xW0Pa5WYep