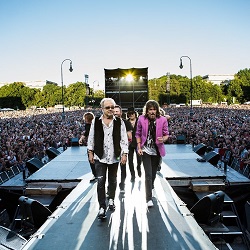 Filmed in the landmark Gibson Guitar Showroom in Hollywood, California, MIXTAPE gives viewers an exclusive interview with some of rock’s most iconic figures where they tell the story of their lives through the songs that they love. MIXTAPE is also packed with surprise appearances and unplugged performances. MIXTAPE is the ultimate classic rock experience that music lovers of all ages will not want to miss. Get a first look at the new series with an exclusive sneak peek of our series premiere with Mick Jones and Kelly Hansen of Foreigner. Watch the full episode Thursday, September 12th at 8:30/7:30c!