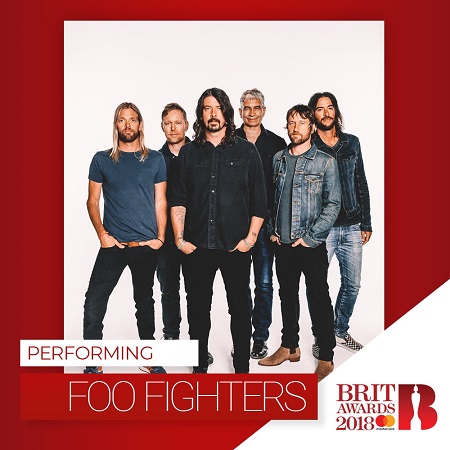 Four-time BRIT winners and one of the world’s most successful bands Foo Fighters will make their BRITs performance debut on February 21st. The band will perform live alongside Ed Sheeran, Sam Smith, Stormzy and Dua Lipa.

Foo Fighters have sold more than 25 million records and sold out countless world tours. The band’s acclaimed ninth studio album Concrete and Gold was their fourth to hit #1 in the UK.

BRITs Chairman & CEO and Chairman of Sony Music UK & Ireland Jason Iley said: “Anyone who was lucky enough to witness one of their shows on the recent sold out UK tour, or their set at Glastonbury – which was undoubtedly one of the best performances the festival has ever seen and a night that will be talked about forever – will know why Foo Fighters are the biggest and most exciting rock band in the world. Quite remarkably they have never performed at The BRITs, so I am over the moon to confirm a massive BRITs exclusive to have them grace our stage.”