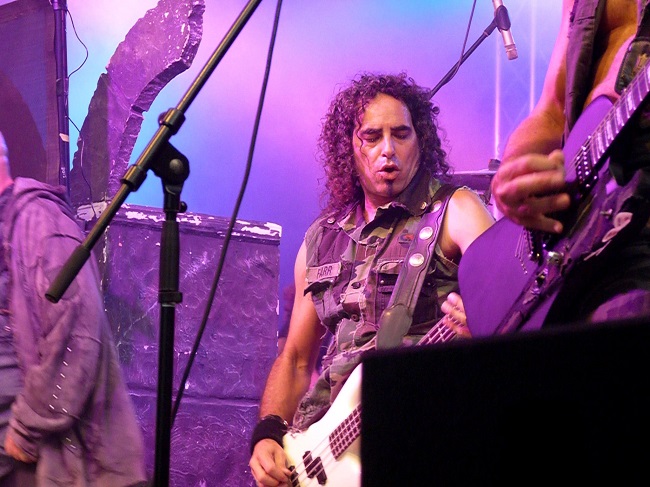 Southern California veteran musician Rob Farr, best known as the bass player for WARRIOR, has passed away at 58. Farr died peacefully in his sleep and was found dead on Sunday, May 9, after last playing a gig with his cover band Radio 80’s two nights earlier at The Kraken in Cardiff-by-the-Sea CA on Friday, May 7.

Farr’s long-time bandmate, drummer Dave DuCey (RHINO BUCKET, WARRIOR), posted the following message on his Facebook page: “I’m in shock. My friend Rob Farr passed away yesterday. We played in a band together for 8 years (National Dust), and it’s hard to believe that it’s true. We played in Sturgis together in ’06 and ’07 and countless other gigs. We played together at the Bang Your Head Festival in 2009 in Germany and Rocklahoma the same year with Warrior. We played together at the Keep It True Festival again in Germany with Warrior in 2014. I recorded 2 albums with him in National Dust (‘The Road Is My Home’ and ‘National Dust III’) and an album with Warrior (‘The Wars Of Gods And Men’) back in 2004. He always had a huge, beautiful smile and loved playing his bass guitar, and had a true love for music. He will be sorely missed. Rest In Peace, Rob!!”

Farr grew up in the San Fernando Valley era of Los Angeles but was a resident of Oceanside, CA, at the time of his death. He began playing in bands at the age of 13 and was part of the bustling 1980s L.A. music as a member of thrash pioneers DÉTENTE, HIT & RUN, and TIGER ROSE. He joined WARRIOR in time for the band’s most recent album, ‘The Wars Of Gods And Men’, which featured Marc Storace of KROKUS on lead vocals, and subsequently recorded three albums with biker rockers NATIONAL DUST between 2005 and 2012.