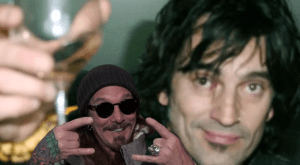 This excerpt was taken from a full in bloom interview with ex-Motley Crue frontman John Corabi.

LISTEN TO THE INTERVIEW VIA THE EMBEDDED YOUTUBE CLIP BELOW. You can access the video directly on YouTube @ this location. The interview excerpt has also been transcribed.

John talks about his relationships with each member of Motley Crue – Tommy Lee, Nikki Sixx, and Mick Mars.

Were you closest to Mick (Mars) in the band? I know he said before that his favorite Motley album is the ’94 album.

I think, at the time, when I was in the band, I was probably, maybe just a smidgen more close to Tommy (Lee) because Tommy and I toured together. We were in the same bus together. It was just me and Tommy in a bus.

And what, Mick and Nikki in the other?

Yes, and only because Tommy and I were the only drinkers in the band. We were more apt to go out to a nightclub together. But it was funny, I had a weird relationship with each guy in the band. Nikki (Sixx) and I were from the “Ok, we’re going to write lyrics together,” and Nikki was awesome. He was amazing to me when I first joined. But we spent a lot of time together creating shit. Tommy and I also spent a lot of time creating stuff, but just hanging out.

Then I went through a divorce, and I was going to get a condo or an apartment or something, and Mick goes, “Dude, I got a guest house, just stay at my place.” I ended up living with Mick. So, I had a little bit of a separate thing with each guy. But it’s funny, I was kind of like a sounding board for all three of them. So, when I was with Mick, I would say something crazy Nikki or Tommy did, and Mick, in that tone that he has in his voice, would go, “Well, now you know what I’ve dealt with for the last fifteen years with those boneheads.” If I was talking to Tommy, he would talk about Mick and Nikki. Then when I was with Nikki, he would have things to say about Tommy and Mick. Things that they were doing right or wrong. So, I was just kind of floating.

Tommy and I had a shit-ton of fun together. We toured together. We drank together. There were times that I went over – I called it the black hole – I would go over to Tommy’s at noon just to say, “Hey,” and I would get home the next morning at 10 AM. We would just sit there drinking and listening to music. So, I think I was a little closer to Tommy than the other guys, but not by much.

Are there any standout moments on the tour bus with him?

Dude, life on a tour bus with Tommy is just one continuous standout moment. That guy will, and I don’t mean this as a slag, he will eternally be energy, eight-year-old, just curious about everything…I’m only going around once, so I’m going to cram as much as I can into this life. And I got to appreciate it. I love Tommy. That’s the only thing I miss about how things turned out with us is that, more than anything, I felt like I lost a couple of cool friends.