Blackie Lawless on Ace Frehley, Bill Aucoin & W.A.S.P.’s 2nd Troubadour Show: “From that moment, with every gig we played, you could feel that ‘magic and tension’ in the air” 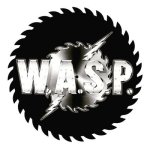 You can read more W.A.S.P. history via our previous post @ this location. 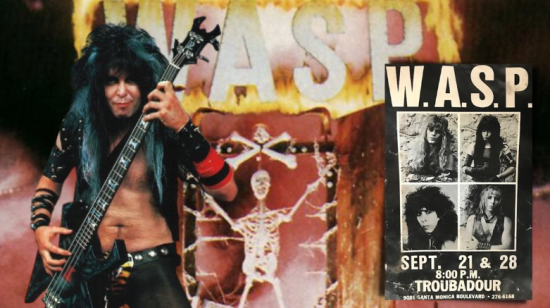 After the first show W.A.S.P. did in August we were trying to move up to Hollywood. That was the place if an artist wanted to really get noticed was the only place to be. From as early as the 1960s, Los Angeles was the place to be if a record deal was an artist’s ultimate goal. Yes, it could be done elsewhere, but L. A. was the place that was the real seat of power in the music world.

But the day after our first show we had a major problem. There had been a serious disagreement between Chris Holmes and Don Costa the bassist. The next day Chris called me and said, “Either he goes, or I go. I won’t play with him anymore.” This was serious. I felt strongly we had the personal chemistry as a band with these people as players and performers. I spent 6 years in L.A. trying to find this combination of guys that had that special magic…that “chemistry.” Chris was the guy I was starting the band with but when he gave this ultimatum, I had little choice. I knew how hard it was to find people like Don, and this was no small problem.

I had known Randy Piper from a band we worked with before, so I gave him a call. The 4 of us rehearsed and it was seeming to work but we had another big problem…. 3 guitar players and no bass player. This combination of chemistry I keep referring to might work, so as opposed to trying to find this “unicorn” of a bass player, I decided to do it myself. First and foremost, I’m a guitar player, so switching to bass wasn’t hard, but playing bass and singing took a bit of time to get it feel of it.

Prior to our first show I had sent demo tapes of what ended up being mostly our first album to both Ace Frehley and Bill Aucoin (manager of KISS), and they were scheduled to come out to this first show at the Troubadour. So let’s see, all I need to do is find another guitar player with that magic, learn the songs on bass guitar and start putting a show together, all in just about 3 weeks. What could possibly go wrong? I felt like I was trying to build the pyramids in less than a month, and that’s not an overstatement. I’ve often said, ‘We never had any intention of ever playing live’ because we were concentrating on recording, but there’s also an old expression that says, ‘You only get one chance to make a first impression.’

I knew we weren’t ready to showcase ourselves as a band so I called both Ace and Bill and asked them if they could postpone coming out from New York for another week to September 28th. But now we have another problem. We had no track record as a band for selling tickets. To get into a venue like the Troubadour and have them book us in the first place was a huge deal. The Troubadour was world famous. The show on the 21st was at 8 PM on a Tuesday night. Considering the place is closed on Mondays, the 8 PM slot on Tuesdays was the worst spot in the week. The talent buyer at the Troubadour was Mike Glick, and he booked all the shows. He booked us for the first show on the 21st on the strength of our demo tape. So when I asked him if he would book us again the following week on the 28th, it meant he was putting his butt on the line. Usually that venue was booked months in advance, but fortunately he still needed a band for that slot, so he gave it to us. I cannot describe how unusual this series of events came into being and how everything needed to fall perfectly into place. Getting that second date, for an unproven band was an absolute miracle!

The first show on the 21st was OK. Fairly uneventful with no real Hollywood-type movie beginnings or ending. There was a whopping 63 people in the crowd that night. For the show on the 28th, both Ace and Bill were there. As a band we were better, but we had none of the big stunts or visuals the band would later be known for. But the one thing we did have, we had those songs. “Love Machine,” “Hellion,” and “I Wanna Be Somebody,” and our look and image were also starting to take shape.

After the show, they both came up to the dressing room and we talked late into the night. I remember getting the feeling from Bill that he felt we still needed work. As much as I hated to admit it, he was right. As he put it, we were “still developing.” I distinctively remember him saying that, and the sick feeling I had in the pit of my stomach thinking, ‘Well, we had our shot and now we’ve blown it.’

But looking back Bill was absolutely correct. We needed time to “develop.” To develop the visuals that perfectly matched those songs. To get “tight” as a band, that only playing live gigs can do for a group. As disappointed as I was after that night, I really started to mentally dig in and stretch my imagination. The whole band did. Thinking back, that development happened very, very quickly. Over the next 2 to 3 months, we would come up with the “saw blades,” “drinking blood,” the “raw meat,” the naked girl on the “rack,” and a “sign that exploded into flames” and the show the world would be assaulted with, reviled over, banned and condemned by 18 short months later. From that second Troubadour show we grew at “light speed” and doubled and tripled the size of our crowds with every show we did. Both visually and musically we had become a dangerous band, and from that moment, with every gig we played, you could feel that “magic and tension” in the air, and every time we took the stage it was so thick you could cut it with a knife.

Not bad for a band that “never had any intention of ever playing live”!

The excerpts below are taken from our full in bloom interviews with Randy Piper, Tony Richards, and Chris Holmes.

full in bloom: Whose idea was it to drink blood and chop meat on stage? 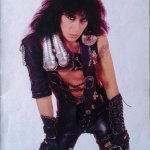 That was Blackie’s gig. I didn’t want to drink blood.

full in bloom: Blackie would even put the raw meat in his mouth.

Oh yeah, wherever we could find it. We’d send the roadies to the store for meat. They would come back with some pretty bad cuts, too. (laughs) 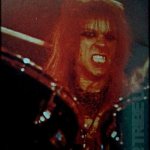 The first shows were just absolutely awesome. They were unbeatable. There was no one else in town that could touch us. We were madmen. It came across and it worked great. If you didn’t see those early W.A.S.P. shows in L.A., you missed out because it was never the same, and not just because I was out of the band. Mainly, once members were changed and they had to go to different venues, there were, of course, restrictions. It changed, but those early shows in Los Angeles were tops. If you didn’t see one of those shows, you don’t know what you were missing. We got away with murder in those early days. It was crazy and a very, very exciting time.

On Blackie chopping the meat and drinking the blood:

A lot of Blackie’s ideas, a lot of good ideas coming from that man; movies, tv, and shit. He incorporated it into the stage, and boy, let me tell you, it worked. I can’t remember a show that we did, that the Fire Marshal’s weren’t out there inspecting before we started the show.

full in bloom: So W.A.S.P. was pretty much a sensation as soon as you guys start playing shows?

I will tell you what, I’m not going to say any dates because I’m not really for sure. But the story is, we played around town, about a year, W.A.S.P. existed about a year, and we got signed. That was kind of unheard of. I think it was ’81 through ’82 we played and by the beginning of ’83 we were negotiating our contract. We got signed, by ’84 the album is out, and we were like BOOM, we were gone. We packed everywhere we played, us and the Crue.

Read more W.A.S.P. history via our previous post @ this location.