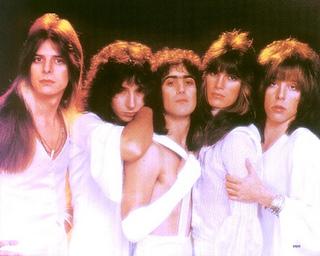 Frank DiMino is best known as the lead singer of 70s iconic rock group ANGEL. Known for their elaborate stage show and all-white costumes, Casablanca Records signed ANGEL to a multi-album deal upon the recommendation of KISS without even hearing the band play. They released six albums for Casablanca and toured non-stop, playing American arenas with Aerosmith, Rush, Journey, Styx, Ted Nugent, and others. A highly successful Japanese tour would include two nights headlining the legendary Budokan and being greeted with “Beatlemania-like” fans at the airport. ANGEL appeared on the television shows American Bandstand, Don Kirshner’s Rock Concert, The Midnight Special, and in the film “Foxes”. Years later after ANGEL disbanded a revamped version of the group was formed with several new members. This resulted in a new album and live shows in Europe and America.

During the 80s, Frank became an in-demand session singer and worked with mega-producer Giorgio Moroder. It was during this time he received a platinum album for his vocal contribution on the Flash Dance soundtrack. He later recorded with Loudness, King Kobra, Sparks, Paul Raymond (UFO), performed on several tribute albums, and secured multiple television placements for his songs. Frank DiMino continues to perform live as much as possible and some of his projects have included Oz Fox (Stryper), Jimmy Crespo (Aerosmith, Rod Stewart), and appearing in the hit show Raiding The Rock Vault on the Las Vegas Strip. In addition to studio work and live performing Frank is a well-respected voice teacher and music counselor for Rock ‘n Roll Fantasy Camp.

Private Lessons
Frank DiMino is currently offering private 1 hour voice lessons in Las Vegas and via Skype. He teaches all styles and all ages. Whether you’re a beginner or professional, he’ll provide you all the tools you’ll need.

Things you’ll learn:
-Proper breathing technique
-How to avoid strain on your vocal cords
-Finding your vocal range and expanding upon it
-How to sing with power and quality to your voice
-Develop pitch control and tonal quality
-Sing in harmony with other singers
-Warm up exercises
-Overcome stage fright and gain confidence in your voice
-How to maintain complete vocal health when touring
-Microphone technique

On-location Coaching
Subject to his availability, Frank also offers on-location vocal coaching for singers and/or band members during their recording sessions or rehearsals. If traveling outside the Las Vegas area the client must provide hotel accommodations and cover all travel expenses.

Credentials
Professional singer for 40 years – performed on many albums as lead singer and background vocalist – received a platinum album for his contributions – his voice can be heard on several film soundtracks and television programs – toured all over the world as a member of the band ANGEL sharing stages with some of the biggest names in music – voice counselor for the Rock and Roll Fantasy Camp – attended Berklee College of Music in Boston for Composition and Arranging – has been a vocal instructor for over 15 years.