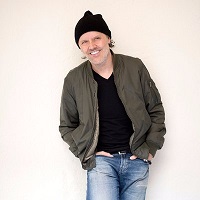 Lars Ulrich: “Well, fuck it…
“Today you get two:
“On March 27th in ’82, we played our 2nd & 3rd shows at the legendary Whisky a Go Go in LA, supporting Saxon. For us at the time, this was like winning the lottery. Not only was this our first Hollywood gig, but in the early 80s, Saxon were one of the biggest, most exciting & influential hard rock bands in the UK & Europe. I had actually seen them six months earlier on their Denim & Leather tour in Brighton, where I even managed to sneak backstage. Haha…

“Back then, our set consisted mostly of cover songs & most of those were Diamond Head songs. Funny story… after the 1st set, this guy on Saxon’s crew comes into our dressing room & asks us, in a very matter-of-fact tone, whether we had ever heard of a band from England called Diamond Head.

“All in all, an incredible night for ‘Tallica & a mind fuck for us to see our logo occupying the same space on a flyer as the mighty Saxon & the celebrated Whisky a Go Go. 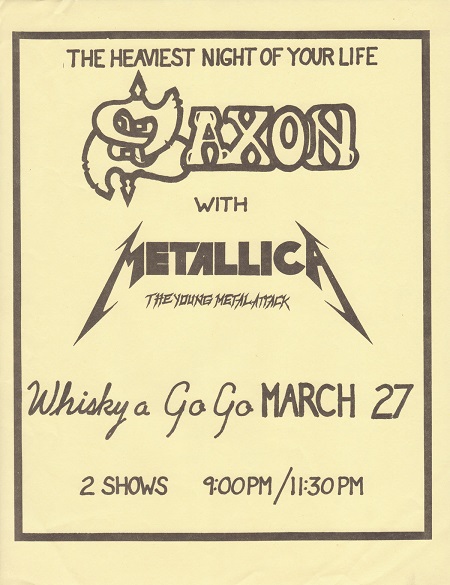 “Two years later, on the same date in ’84, we played London’s Marquee Club for the very first time, marking our 1st gig in the UK. Everything that lead to Metallica’s existence up to this point was greatly inspired by the New Wave of British Heavy Metal bands, along with the sounds, lifestyles & culture that came out of England & the UK at the time. So many of the bands who had recently inspired us, like Iron Maiden, Tygers of Pan Tang, Angel Witch & Samson had been performing there over recent years, and on top of that, the Rolling Stones, The Who, the Jimi Hendrix Experience, etc. also had significant history at the club.

“To finally hit that same stage at the iconic Marquee Club, right in the heart of London, was another total mind fuck for us. The incredible relationship we’ve enjoyed for over 35 years with England & the UK started that very night.
Cheers!… as they say” 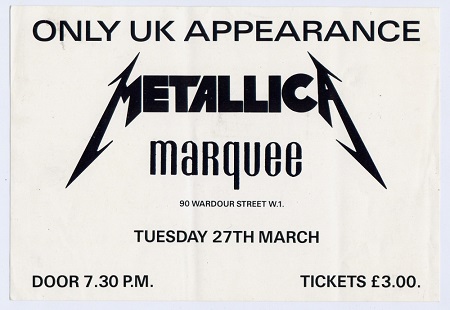