The metal group, The Dillinger Escape Plan, were involved in an accident when a truck rammed the band’s tour bus, near Krakow, Poland. Thirteen people were injured resulting in the Jersey band cancelling their Krakow gig on Sunday. It does not appear that the band members are seriously injured but were taken to a nearby hospital for tests. 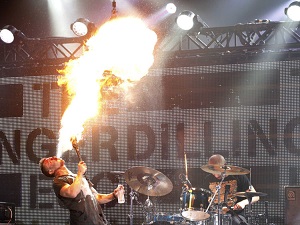 Although the band has released six studio albums, The Dillinger Escape Plan are mostly known for their outrageous live performances. To date, their most controversial performance took place in the UK at 2002’s Reading Festival, where vocalist, Greg Puciato, took a crap on stage, put it in a bag and heaved it at the crowd. The incident nearly got the group banned from the UK and left me wondering, ‘what the hell does it take to get banned from the UK?’ 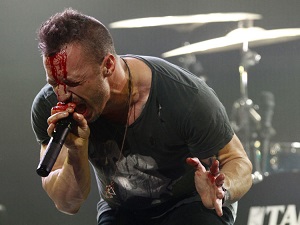 It appears that The Dillinger Escape Plan have cancelled all remaining European Tour Dates:
A spokesperson for the band released the following statement: “On Saturday, February 11, The Dillinger Escape Plan and crew were driving to their show in Krakow, Poland when their bus broke down and the driver had to pull over on the side of the road. A truck smashed into the trailer, which held all the band’s gear, before hitting the bus. No one is in critical condition but the band and crew are still being assessed for the extent of their injuries at Szpital Wojewodzki im. Jana Pawla II (John Paul Regional Hospital) in Zamosc.

“The remaining dates in Croatia, Germany, Switzerland, Italy, France, Spain and Belgium (running through March 5) have been canceled.”

Previous: A Detailed Breakdown of Pantera’s “Cowboys from Hell” – MUST SEE!!
Next: Megadeth Wins 2017 Grammy for ‘Best Metal Performance’