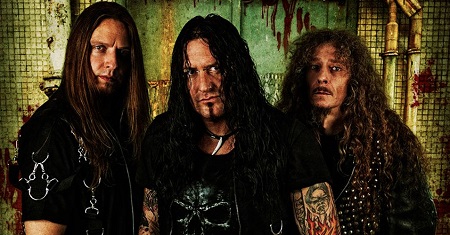 German thrash band, Destruction, are recruiting their fans to help finance a new album, Thrash Anthems II. In 2007, the band released Thrash Anthems, an album of re-recordings of their older songs plus two new songs.  Go to PledgeMusic for more info.  Below is a message from vocalist Schmier:

“Re-animating some old classics was already a great challenge on the “THRASH ANTHEMS” record that we did some years ago.

A lot of young thrashers especially enjoyed the freshening up of the 80’s material. As we took a lot of those songs into the setlist again after the recordings, it also had a big impact on the band. Without that first “Thrash Anthems” record, some old pearls would have never made it back into the setlist again.

Now we are going to do “THRASH ANTHEMS II” without a record label and include the fans into the process of doing this album. We want to bring such classics as “UNITED BY HATRED”, “CONFUSED MIND” and “THE RITUAL” back to life and you can help contribute your part to *DESTRUCTION’s history by helping us make this record.

As this campaign goes on, we will inform you about the material we will record, the recording process, and the cover layout. So stay tuned and join us for something special! We have never made an album without a record label, so this is for sure a new challenge.

We will still work with NUCLEAR BLAST in the future, but this project is an exclusive one with our fans worldwide!