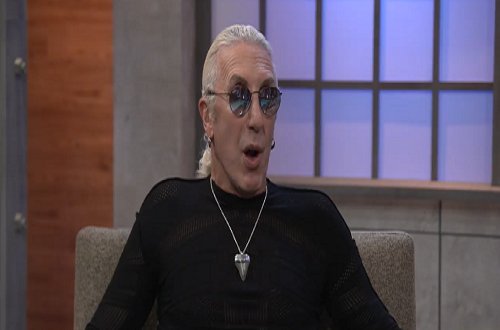 Dee Snider told Yahoo Entertainment that he’s fine with any 2020 presidential candidates using that song, as long as they meet one important criteria.  Watch the interview below.

“There’s a simple litmus test here: Are you pro-choice?” says Snider. “And by pro-choice, I mean all choices. I mean, pro-people’s rights to choose, particularly a woman’s right to choose. I feel very strongly. And that is the litmus test. I hate the whole concept of pro-choice versus … well, I call it ‘no choice.’ It’s not like you choose for yourself, and that means you can have children, or you don’t have children. They’re like, ‘No, we’re deciding for you what is right for you.’ Anybody who is pro-choice, and has at least that position, knock yourself out — Republican, Democrat. And there are Republicans out there who are [pro-choice]. They call them ‘Northeastern Republicans’ as a rule, and they tend to be fiscally conservative/socially liberal. I love those guys. So yeah, if you’re pro-choice, yeah, go for it.”

“I don’t have to deal with that. I’m beyond it. I had my vas deferens snipped, so there’s no chance! I have no concern about that. I’ve got medical care; I don’t need Planned Parenthood. But there was a time when I did, when I was a kid, and I didn’t have any of those things. And it upsets me that this is taking away from people as an option, because it’s not just about terminating pregnancies. The majority of what Planned Parenthood does, an organization like that, is give people guidance and information. And so, it’s just such a much bigger picture, and it drives me crazy, but mainly for my children. I have grandchildren now. And I’m thinking about the world that they’re growing up in, and it’s a mess.”

Snider stresses that he “pro-every amendment,” laughingly noting that Vice once called him a “gun-carrying woman’s rights activist,” because he steadfastly believes in both the First and Second Amendments. “I’m a concealed carrier, and I believe in that right as well — of course, intelligently. We can make some adjustments. I’m not NRA material. I don’t have a blind [mindset] like, ‘Grenades!’ No, we don’t need grenades.”

As for his estrangement from his old friend Trump, Snider explains that the last straw that made him ask Trump to stop using “We’re Not Gonna Take It” was “the immigration thing. That was the breaking point, because my grandfather received political asylum in this country. And if he was not given political asylum, I wouldn’t be here. So how could I just insult his memory by standing with someone who is so hard against that? … But the point is, I fight for all the amendments, and I believe in them. I believe in this country. So there’s a lot that [Trump] does not stand with, and I don’t stand with him.”

Read the article at this location.