Dee Snider:  “Just finished Martin Popoff’s book Lights Out on UFO. Thanks for reminding me how important Pete Way, Phil Moog, Andy Parker & Michael Schenker were to me & so many others. Such an amazing band!” 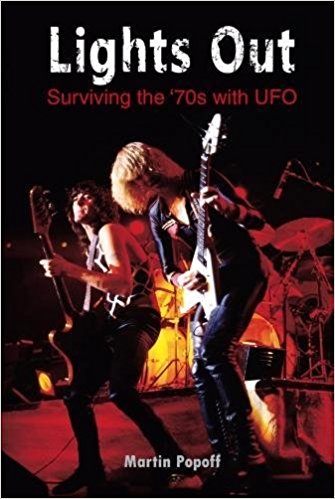 The first book ever on the classic British rock band UFO. Based around the author’s many interviews with all the key players such as Phil Mogg, Pete Way & Michael Schenker. Noted author Martin Popoff takes you through the Schenker era in great detail; album-by-album, song by song along with touring anecdotes and of course, tales revolving around the wild and excessive behavior that was very much a part of the band.

Having written the first book ever on UFO, 2005’s long out-of-print Shoot Out the Lights by Martin Popoff, author of 72 rock books, has now been greatly expanded and rewritten, bringing us Lights Out: Surviving the ‘70s with UFO.

The book features new interviews with Phil Mogg, Andy Parker, Michael Schenker and Paul Raymond (plus the likes of producer Ron Nevison and Hipgnosis co-founder Aubrey Powell), along with a substantial amount of new discography info and press research, to offer what is now the only book to focus on the ‘70s era of the band.

Utilizing his celebrated one album per chapter method, Popoff analyzes the complete catalog from this golden period of the band – Flying, Live, Phenomenon, Force It, No Heavy Petting, Lights Out, Obsession and Strangers in the Night – bringing you the stories of hits such as “Doctor Doctor,” “Rock Bottom,” “Shoot Shoot,” “Let It Roll,” “Lights Out,” Love to Love,” “Too Hot to Handle” and “Only You Can Rock Me.”

In and around Popoff’s famed meticulous analysis of the catalog, the book also features lots of tour talk, revealing nightmares surrounding the band’s business, and warnings about how the twin demons of drugs and alcohol can slow a band’s progress on the way to the top.

Also included is a detailed 1970s band discography and a gloss photo section.

About Lights Out: Surviving the ‘70s with UFO, Popoff says: “I really shortchanged the Mick Bolton-era version of the band in the 2005 book, so look for those records to be examined in much more detail. And just in general, what you’ll find with Lights Out is a more track-by-track analysis of every album, basically a deep celebration of the classic Schenker years, along with, like I say, a nicely fleshed-out representation of the genesis of the band. Bottom line, this book is DOUBLE the word count that was applied to 1969 – 1979 material in Shoot Out the Lights.”