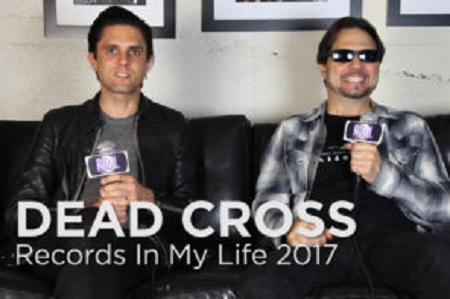 Justin Pearson and Dave Lombardo of Dead Cross were on a recent episode of Records In My Life where they discussed some of the albums that helped set them on their musical paths. Picks included albums by No Means No, Kiss, Sex Pistols, and more. The interview has been embedded below.

Dead Cross, the hardcore group featuring Dave Lombardo (ex-Slayer, Suicidal Tendencies, Misfits), Mike Patton (Faith No More, Tomahawk), Justin Pearson (The Locust, Retox) and Michael Crain (Retox, Festival of Dead Deer), released their debut album on August 4th via Patton’s imprint, Ipecac Recordings. The band is currently on the North American leg of their tour, which wraps up on September 23rd in Denver, Colorado. A list of remaining dates can be found at this location.

Previous: The GRAMMY Museum Welcomes Iron & Wine on September 22nd – Tickets $20
Next: The Rolling Stones Announce Cage the Elephant as Special Guest for ALL Paris Shows