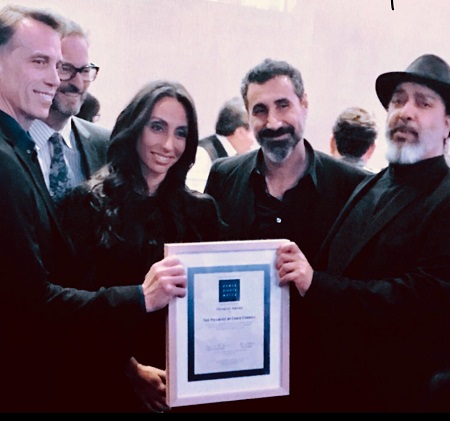 The Los Angeles Committee of Human Rights Watch presented its inaugural Promise Award to the late Chris Cornell in recognition of his song,”The Promise.” The track was written as the ending credits song for a film of the same name. The film tells the story of a love triangle between Mikael (Isaac), an Armenian medical student, Chris (Bale), a Paris-based American journalist, and Ana (Le Bon), an Armenian-born woman raised in France, immediately before the Armenian Genocide.

The Promise Award recognizes an outstanding song, television show, or film that advances the values of equity and justice in an original and powerful way. System of a Down singer and human rights activist Serj Tankian presented the award to Cornell’s wife Vicky, Eric Esrailian (the film’s producer) and former Soundgarden bandmates Kim Thayil and Matt Cameron.

Vicky Cornell commented:
“Thank you to Human Rights Watch for naming Chris Cornell as the 1st recipient of The Promise Award and recognizing his contributions to preserving human rights around the world.”

In addition, Ryan Tedder and Drew Brown of One Republic performed Cornell’s song at the dinner. A video of that performance has been embedded below.

Thank you @RyanTedder for your very moving and powerful rendition of The Promise. Chris would be so proud. I’m grateful to you for all the love and support you have shown our family #KeepThePromise pic.twitter.com/xshEnEtwrS