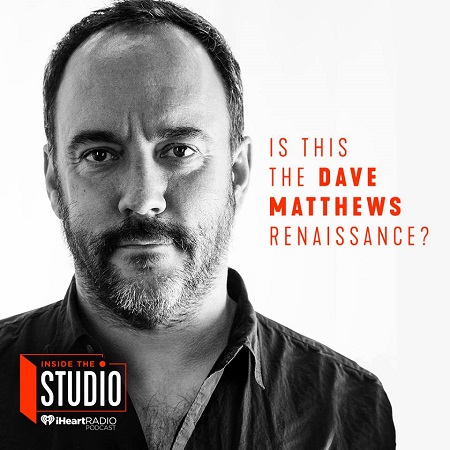 iHeartRadio Presents: Inside The Studio with Dave Matthews Band. In the segment, Dave talks about turning 50, politics, music and much more. Listen to the interview via the embedded widget below.

This time around on iHeartRadio Presents: Inside the Studio, host Joe Levy goes deep with Dave Matthews, on the heels of the release of his most recent (and record-setting) #1 album “Come Tomorrow” (RCA Records). Levy probes everything from the recent changes in the Dave Matthews Band lineup, Dave’s response to the backhanded compliment he receives in the hit film “Lady Bird” and why it looks like there’s no end in sight for the 50-something rocker.

iHeartRadio presents “Inside The Studio,” a brand-new, in-depth series featuring intimate conversations with some of music’s biggest stars. Each episode features an unscripted sit-down with artists on the verge of releasing new material – rounded out with a sound-rich tour through their lives and discographies. Taking advantage of podcasting’s lean-in approach, “Inside The Studio” reveals previously unseen sides of artists, giving fans the sort of access that is missing from much of today’s music coverage. Inside the Studio is written and hosted by Joe Levy, a Contributing Editor at Rolling Stone, and correspondent for Access Hollywood who is frequently seen on The Today Show and CBS This Morning, and is produced by iHeartRadio and Audiation.