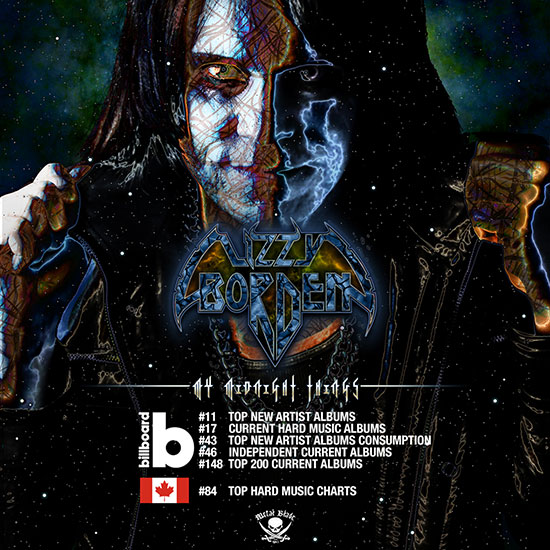 “We live in a streaming world now, where everyone gets their music for free,” explains Lizzy. “But I want to personally thank all the great Lizzy Borden fans out there who shopped online or drove down to your local mom and pop music store and actually paid for my new album. You guys got Lizzy Borden back on the charts! And the fact that you’ve all embraced My Midnight Things in such an amazing way is the icing on the cake. Thanks again, and I will see you all soon on the ‘My Midnight Things‘ tour!”

Released on June 15th via Metal Blade Records, My Midnight Things can be purchased and previewed at this location.

Having signed a new contract with Metal Blade on the strength of three demo tracks, Borden opted to produce My Midnight Things himself, with Joey Scott as co-producer, who also handled all the drumming duties. “I knew what I was going for and had doubts that I could find a producer who would understand that,” Borden explains. “My approach is very different than what is happening in today’s current sound.”