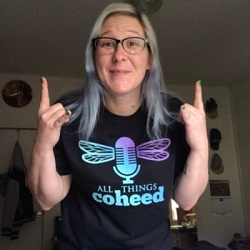 Cyndi (All Things Coheed Podcast): “You know, I notice our fanbase will sometimes come to the shows early, and I wanted like to do something that will get them involved with each other in these moments.” -Claudio Sanchez

“You know, I notice our fanbase will sometimes come to the shows early, and I wanted like to do something that will get them involved with each other in these moments.” https://t.co/k5sSk3ieOr

EXCERPT FROM THE INTERVIEW

You mentioned that a job you had as a teen really spurred the music and lyrics of what became Coheed and Cambria.

Claudio Sanchez:  Yes, my pet store job, just ’cause the guys there allowed me to do what I needed to do to allow the band to grow. You know, they gave me the weekends off when I needed them. Working in that store inspired a lot of like little details within the Amory Wars, the Coheed story. Like the name of the solar system that the actual story takes place on is called the Keywork after the guys that own the store. I named the solar system after them. I chose the color of the interlocking theme of Keywork to be blue because I worked on fish tanks, and they’d have these blue backdrops. The main villain I named after one of the managers because he actually said, “Hey, if you ever do make this story, I want to be your villain.” The fact that he sort of believed in me, that I would actually make this thing … So I named the character after him.

I know it was in Paris where you first created the Coheed and Cambria characters and more. Was it the city itself that that was influential or was it just being out of your normal environment?

Claudio:  I think it was a little bit of both. I went to Paris for about a month to visit a girlfriend at the time. I had never been that far away from home. Jersey was probably the furthest distance I’d traveled, literally, and here I was at 18, ready to hit Europe, with really no idea what to expect. Once I got there, the architecture had a lot to do with maybe feeling like I was in an alien environment. Originally the story with the title The Bag On Line Adventures Adventures of Coheed and Cambria after the bag shop I was living across the street from. I thought that that was appropriate because I was traveling and, you know, sort of the wild things that would come out of your bag.

Even though the bags had nothing to do with the story, there was just something about the shop that made sense to me. I loosely based the characters of Coheed and Cambria after myself and my significant other at that moment. But as I started to really write songs and flesh out the ideas of the story, Coheed and Cambria really started to take on the likenesses of my mother and father. And it really became like a science fiction story about my family; that’s where all the little details from life started to spill into it. Like the pet store stuff. The Amory Wars; Amory is actually the road I lived on. And 78 planets of Heaven’s Fence was actually taken from the year I was born, 1978. There’s a lot of symbolism in the real story that sort of resides behind the science fiction.

Of course, Pink Floyd’s The Wall and Queensryche’s Operation: Mindcrime are conceptual landmarks. What did you dig?

Claudio:  My first year of high school, that’s when I started to go to concerts. My first two concerts were really, I think, what cemented me into the idea of this much bigger story in terms of music. The first one was Sabbath at the Beacon Theater with Dio fronting. This is my first concert. I didn’t even know that the live sort of thing… I mean, I think I even know that was a thing! I went and I was like, “Wow, this is amazing the way the lights are interacting with the band.” Then my second one was Pink Floyd on the Division Bell tour. That’s when I started to fall down the rabbit hole of progressive rock and conceptual albums and things like that. ‘Cause after that it was The Wall, Dark Side [of the Moon], Animals. Again, just watching the visuals and music interact with each live, but even the myth of playing Wizard Of Oz against Dark Side, you know. Of course I tried it!