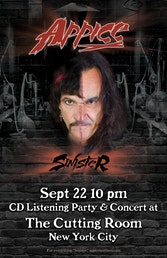 This a listening party for cd out October 27th and a concert with all star band playing all hits from our past. Sabbath. Ozzy. Dio Rod Stewart Blue murder. Killer show with me and Vinny at the helm.

Regarding the forthcoming album, Vinny said: “A studio album that was years in the making has now come to life! Our first ever studio CD together. With great songs, musicians and of course drums and rhythms that will overwhelm your ears and fascinate your mind!”

Previous: Jim Carrey’s Red-Carpet Fashion Week Interview, “I wanted to find the most meaningless thing that I could come to”
Next: Crystal Garden Featuring Dave Matthews Band Violinist Announce Tour