Billy Idol, along with legendary guitarist and longtime collaborator Steve Stevens, performed on The Late Late Show with James Corden on Thursday, August 17th. Featured guests include Julia Louis-Dreyfus and Ray Romano. You can now watch footage of the performance, located above.

Billy Idol, Steve Stevens and his band continue the Billy Idol: Forever residency at the House of Blues Las Vegas at Mandalay Bay Resort and Casino.

Billy Idol: Forever features material from throughout Idol’s career, from his days fronting the seminal British punk band Generation X to his hits the world has come to know and love and will transport fans on a wild ride of punk, rock & pop, capturing the IDOL spirit three decades in the making. Along with Steve Stevens, Billy Idol will be performing songs from throughout Idol’s extensive catalog, including “Rebel Yell,” “White Wedding,” “Dancing With Myself,” and many more. 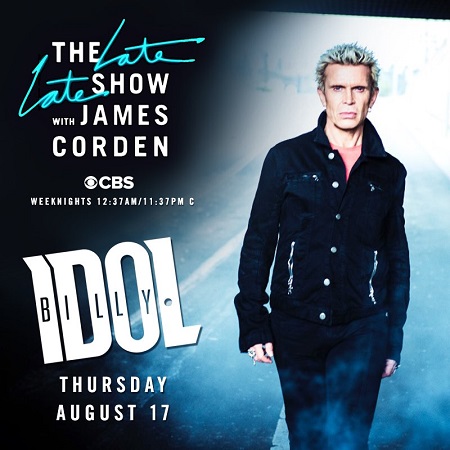 Previous: Pink Floyd’s Nick Mason Talks About the Making of ‘The Piper At The Gates Of Dawn’
Next: David Crosby on Ted Nugent, “the asshole just isn’t good enough”