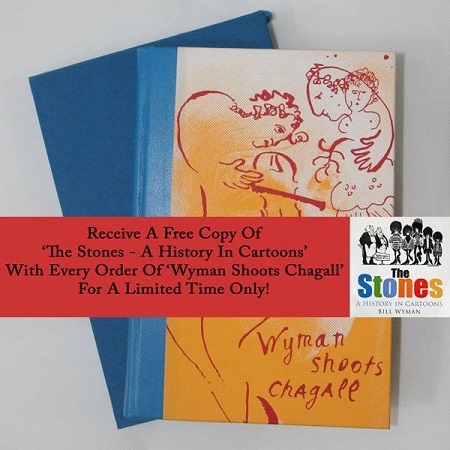 Bill Wyman’s limited edition book about Marc Chagall is available. All copies are signed by Wyman, individually numbered and accompanied by a special CD of solo recordings, which have never been commercially released. In addition, a free copy of The Stones – A History In Cartoons will be included for a limited time only. More info at this location.

Description
Wyman Shoots Chagall is a unique book about Marc Chagall, born of an unlikely meeting between two artists who had achieved greatness in their respective fields. This charming limited edition volume about Chagall and Chagall paintings, restricted to 1,500 copies worldwide, presents the portrait photography and extensive reminiscences of the former Rolling Stones bass player Bill Wyman. Every copy is signed by Bill Wyman and individually numbered.

Wyman Shoots Chagall is accompanied by a special CD of solo recordings made by Bill Wyman in the early ’80s. Featured are “Chagall Suite,” a series of linked orchestral pieces composed by Bill with Mike Batt and recorded by the London Symphony Orchestra, which have never been commercially released; and “Nuclear Reactions,” Bill Wyman’s futuristic pop song about astronomy, a passion he shared with Chagall.