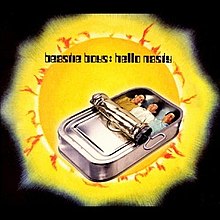 Another little something to celebrate the Beastie Boys album Hello Nasty.  Here’s “Three MCs and One DJ” (Live Video Version) available for the first time on streaming services at this location.

Hello Nasty is the fifth studio album by the Beastie Boys. It was released on July 14, 1998 via Capitol Records and sold 681,000 copies in its first week, debuting at #1 on the Billboard 200 album sales chart. The album was later certified triple platinum for selling over three million copies in the United States alone.