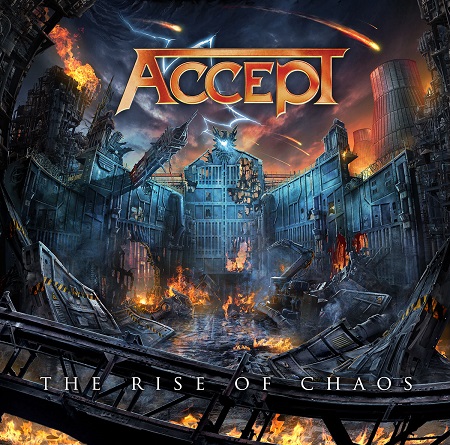 Heavy metal pioneers ACCEPT will release their new album, The Rise Of Chaos, on August 4, 2017. The band’s 4th studio release through Nuclear Blast will continue the tradition of its three predecessors – Blood Of The Nations, Stalingrad, and Blind Rage – with grandeur and precision.

Today, the band has unveiled the cover artwork of the new record, which was created by Gyula Havancsák (GRAVE DIGGER, DESTRUCTION).

“The Rise Of Chaos is something I have been thinking about often. Wherever we go – there is some hidden as well as some visible destruction and it kind of changes the world we know. What was there today – can be gone tomorrow and it’s kind of irritating, because it happens on so many levels and no one knows what comes next. The cover is our last stage set – but now clearly destroyed – like….. after a catastrophe!” explains Wolf Hoffmann.

In addition to the artwork, the band also released their 2017 tour dates for Japan. A list of dates can be found below.