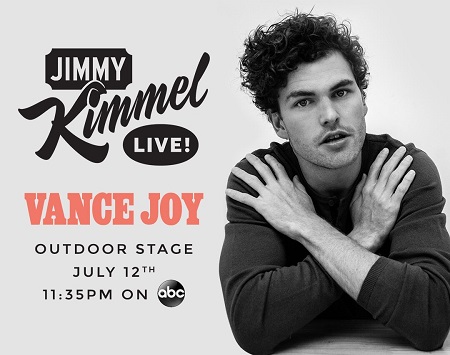 Vance Joy will be the featured musical guest tonight (7/12) on Jimmy Kimmel Live. Tune in at 11:35|10:35c on ABC. Check back, we’ll embed the performance below.

The Australian singer-songwriter is currently promoting his second studio album, Nation of Two, which was released onFebruary 23, 2018. The album debuted at #10 in the United States on the Billboard 200, after shifting over 27,000 equivalent units in the first week.

About the album, Joy said: “Nation of Two describes a perfectly self-contained couple; their world beginning and ending at the bed they share, the car they ride in, or any other place where they’re together… the idea that their love for each other gives them their bearings; a point of reference that makes sense of life.”

Previous: Mötley Crüe Leathür Records Cassette Demo w/ “Public Enemy #1” “Take Me To The Top” “Stick To Your Guns” “Toast Of The Town.”
Next: Paul Simon New Album Announced ‘In The Blue Light’ 2018