Featuring artwork by 13 Candles Tattoo/Madeleine Hoogkamer, Sermon ov Wrath was once again recorded at drummer Marco Stubbe’s Aftermath Studio, and then mastered by Tore Stjerna at Necromorbus Studio, giving the album a savage, crushing sound. As their most diverse record to-date, Sermon ov Wrath contains a bewitching atmosphere, furious groovy riffs, and merciless brutality – proving that the band is not afraid to experiment within the genre.

“I honestly believe this is by far our most diverse and strongest album to-date,” comments vocalist/guitarist Ferry Damen. “‘Sermon ov Wrath‘ has a veil of our poisonous roots breathing throughout the whole album while never compromising when it comes to expanding our sound or musical horizon. I think the song ‘Crown ov the Dead’ is an excellent example of that. We turned into a different beast and I think people will hear that.“ 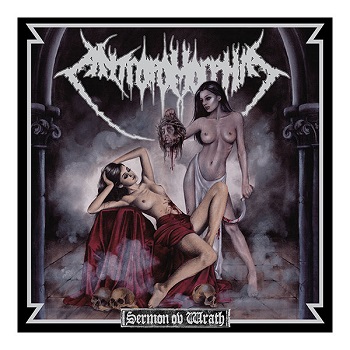