Alice Cooper Guitarist Kane Roberts: “I would think that Nita (Strauss) may intend to come back” – 2022 – INTERVIEW

To bring fans up to speed, how did you end up on stage with Alice Cooper again? 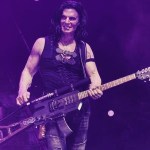 “Well, it was basically that Nita [Strauss] was going to take some time and play with Demi Lovato. And they talked about it, which was amicable; nothing was contentious about it.

“So, I guess Alice was thinking of who he’d like to get to replace Nita, and somebody said, ‘What about Kane?’ So, Alice called me and said, ‘Hey, you want to do the fall tour?’ And I said, ‘Okay, let’s talk about it.’ From there, he explained what happened and that Nita was taking some time, so I said, ‘Okay, I’ll do it.’”

During your first run with Alice, you brought elements of aggression and danger to his music, which have never left. How do you measure your impact on Alice’s sound?

“When I first joined Alice back in the ’80s, I sat down with him before doing that Nightmare Returns Tour, and I said, ‘Look, you don’t want to sound like Alice survived rehab. You want to come back as a nuclear version of who you were.’ And there was such powerfully violent music out there like Ozzy Osbourne, Van Halen, and all these amazing bands, and we had to compete on that level.

“So, that’s how Alice and I generated that first tour and the heavy records that came after. That power and the response we got from the audience were amazing, and it showed that many people didn’t expect it. A lot of people were worried about what Alice would sound like, but as soon as we came out, we hit them hard, and that silenced everyone.

“I remember that even the classics had a heavier feel. We decided with Shep Gordon to pay homage to the early stuff and keep the feel, but we made it heavier. That Detroit rock, classic vibe never left. But the power that Alice displayed during those two tours we did together, I’d say that it’s still vital and more current in many ways. So, I think, yeah, I think an influence that stayed there.

“But, having said that, Alice has some insane creatives working with him. I may have had an impact, but Alice is a genius, and he’s more than covered when it comes to having people around him and being in a creative environment.”

I’d be remiss if I didn’t bring up the machine gun guitar. What challenges did you face trying to resurrect it?

“So, they chucked it into this warehouse, the neck got cracked, and it was jacked up pretty bad. But we wanted to find a way to have it in the show, so I had my luthier fix it up as best he could. He did a great job, but it’s unplayable.

“If you were at any of the shows, you’d notice that I didn’t play it. It was roughed up pretty good after that flood, and there wasn’t enough time to get it working. But they could at least assemble it and make it look functional.”

Back in the day, it shot fire. But this time, it looked as if only smoke was spewing out.

“So, for me, when I played the thing in the ’80s, it felt like I had this flamethrower gun guitar. But on this tour, I had a fire extinguisher gun, so I guess I was putting out the fires instead of starting them this time. [Laughs].

“But overall, it was cool because Alice and I have a tongue-in-cheek attitude toward it. But we both love the energy that the guitar brings, and it’s important to my image and my era of the band. I’m glad we were able to make it work in some way.”

At the onset of this tour, you were looking at this with an open mind but had no definitive future plans with Alice. Has that changed?

“Well, I’m open to a lot. I would think that Nita may intend to come back. But she also has some real career decisions because she’s got a viable solo career, and she’s still out there killing it with Demi Lovato, too.

“So, I’m sure there are a lot of plates that must be spinning, and we’ll see what happens. But yes, I’m open to any discussions. It comes down to me, Alice, Shep, Bob Ezrin, and all the people in the band; we’re all friends and love each other. So, it’s just gonna depend on how things shake out from here on out, but my initial notion was that I would sign on for five or six weeks, and that might be it.”

Previous: Red Hot Chili Peppers’ Flea on The Cure’s ‘Seventeen Seconds’: “Man, it musta felt good in the studio” – 2022
Next: Filming the Opening Scroll for Star Wars ‘The Empire Strikes Back’ – COOL AS CHIT HISTORY – 1979