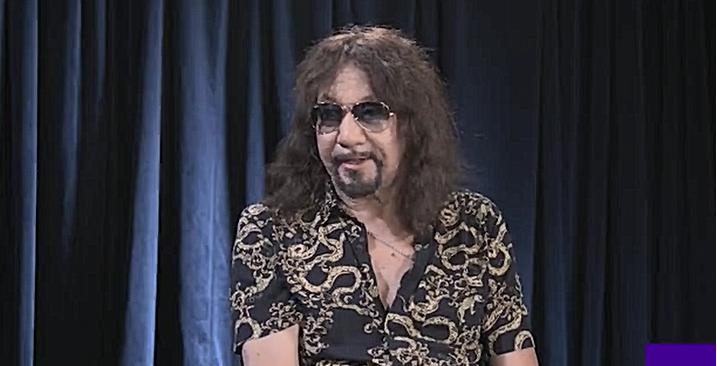 Casual KISS fans might be surprised to learn that Gene Simmons co-wrote two tracks on former KISS guitarist Ace Frehley’s new solo album, Spaceman (“Without You I’m Nothing” and “Your Wish Is My Command,” the latter of which also features Simmons’s bass playing), or that Simmons even gave the album its title. After all, Frehley’s squabbles with both Simmons and KISS’s other mainstay, Paul Stanley, have been well-documented over the years.

But Frehley tells Yahoo Entertainment that there’s “no bad blood” between him and his ex-bandmates — he recently performed with Simmons in Australia and as part of Simmons’s Vault Experience, and Stanley appeared on Frehley’s 2016 album, Origins Volume 1 — and this of course raises the question, will Frehley, who successfully reunited with Simmons, Stanley, and original drummer Peter Criss in 1996, take part in KISS’s just-announced big farewell tour?

“I knew you were gonna ask that,” Frehley chuckles. There’s a glint in his eye that suggests he’s not telling the whole story (at one point he asks exactly when this interview will run) but is revealing all he can offer right now. “OK, I have a pat answer, and it’s true: I haven’t been invited.” That doesn’t mean Frehley isn’t open to the idea, however. “For the right price,” he says, he would “absolutely” do it.

“The first year of that reunion tour, we grossed $215 million, and that was 20 years ago. So what would it be today, probably double that? Half a billion? I’m there,” he laughs.

As for whether Criss would also sign on, Frehley says he hasn’t talked to his old bandmate lately. “Most of the time when I want to talk to Peter, I have to talk to his wife. She’s like his manager, Gigi. She’s a nice lady, but I don’t even think Peter has his own cellphone, or if he does, I don’t have the number,” he shrugs. “When I do business with Paul and Gene, I call Paul and he picks up. He goes, ‘Ace Frehley, how you doing?’ Gene says the same thing. When I want to talk to Peter, or ask him a question, it’s Gigi I go through.” Frehley adds, “For the right price, I’m sure he’d do it. I mean, it’s tough to turn down a couple of million dollars.”

Frehley stresses, however, that he’s “not chomping at the bit” to do another reunion tour “because I’m having so much fun with my own band and recording records at home, and producing them, and writing them, and singing them. … My career has been going up and up and up.” He says the real reason he’d do it, aside from the massive payday, would be for the fans.

“I know the fans want it to happen because of the comments on the internet. Ninety percent of them overwhelmingly are saying, ‘Bring Ace back.’ If Paul and Gene decide to put a deaf ear to the fans, I think it’s going to hurt their careers,” says Frehley. “But you know, those guys always have done what they’ve felt like doing, even when it was not necessarily the best move.”