XYZ Bassist Pat Fontaine on Meeting Don Dokken, Who Produced the Band’s 1st Album, “We had a few beers, a few lines, and a few laughs” – 2022

VWMusic: We recently sat down with bassist, Pat Fontaine, of classic 80s hard rock outfit, XZY. You can read the entire interview @ this location. 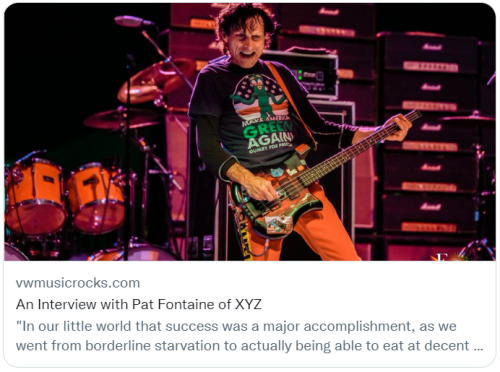 On the heels of the band’s Sunset Strip takeover, Enigma Records quickly scooped XYZ up. What did their courtship look like?

We were at a point of complete despair in late 1986, as we had already inked a demo deal with Atlantic Records, and after recording a full album at Cherokee Studios, we were told, “Thanks-but-no-thanks.”

It was devastating to us. After that blow, Terry (Ilous) and I decided to quit “the dream,” and go back to Europe. Lucky for us, we had a friend/manager that insisted over, and over that, we give it another year. So, we reluctantly agreed. Lo and behold, within that year, things began to evolve for the better. There must have been a point at which the back-to-back sold-out shows at the Whiskey somehow reached the ears of someone at Enigma, who inquired about the band. We were quick to get them a cassette demo of “Inside Out.” A long shot we thought, but it did pan out. They liked the demo and were nice enough to show up at a few gigs. Chatting a bit backstage, buying us a few drinks, and eventually, after a few weeks of courtship, we got the phone call that we so desperately wanted.

Just in time, I must say, as Warrant was already on the air, and in retrospect, it seems we were the last “Sunset Strip band” to get signed, I would venture to say. After us, things were shut down pretty much. We got on the last train in the nick of time. 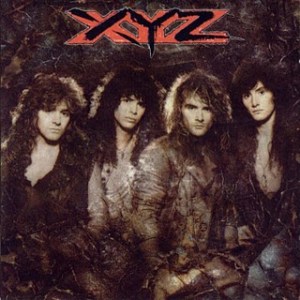 XYZ’s sound and image seemed tailormade for the era, and it seemed to translate on the band’s self-titled debut. XYZ hit the studio with Don Dokken (producer) at the controls. How integral was Don to the sound of XYZ’s debut?

I think back today, and believe we could have distanced ourselves a little more from that very sound. We all were fans of Dokken — Under Lock And Key ruled — still does!

Don did backup vocals on most of our tunes, so his vocal tone is in there somewhere, no escaping that. We did not want too much of his influence at any rate, but at the same time, we were thrilled to have him. He was very dedicated, and present every step of the way.

Don was first brought into our rehearsal basement at Hollywood Musician Institute by our Enigma guy, Curtis Beck. We were a bit nervous, but Don was so casual, even grabbing a microphone to join us on a song or two. After rehearsal, I insisted he come over to our pad a few blocks away, where I made him our daily dish of spaghetti. [Laughs]. We had a few beers, a few lines, and a few laughs. He didn’t care much for my cooking, but he really liked the cute strippers we had living with us. [Laughs].

We talked about working together on a couple of songs, and eventually, we decided to have him as a producer for our first release. It was not always a smooth relationship, and we hit a few bumps here and there. We were a bit more bluesy than he was, I reckon. We fought a bit on musical direction, but his input was always well received, and always valued, as Don is a true pro, and is amazingly quick at writing melodies and lyrics on the spot. He also had great stories of the road, and what appeared to be an endless supply of champagne. [Laughs].