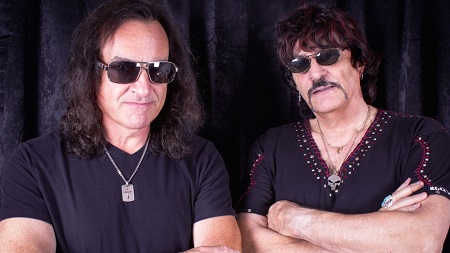 Legendary drummer Carmine Appice (Cactus, Vanilla Fudge, Blue Murder, Rod Stewart) is in the studio recording an album with his just as legendary brother Vinny Appice (Dio, Black Sabbath). To help finance the recording, the brothers are running a PledgeMusic campaign offering a ton of great items from signed memorabilia to drum lessons and even a day in the studio.

The clip below was posted by Carmine and captioned, “Been in the studio at TKL studios in NJ working on the APPICE. Bros cd had a cool set up including my big Classic Gong, my new DDRUM 50th Anniversary Snare and Istanbul Mehmet Ride Cymbal. Did some kick ass tracks which brother Vinny will add his drums to”