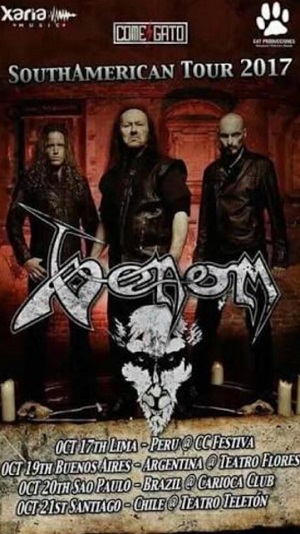 Venom will launch their South American tour today (10/17) at the CC Festiva in Lima, Peru.  From there the band will head to Buenos Aires and Santiago before wrapping things up in Sao Paulo at the Carioca Club.  A list of dates can be found below.

In July, Venom revealed a new EP was scheduled for a late 2017 release, with a 15th full-length studio album slated for 2018.  There has been no official date set for the EP, but a delay to accommodate an accompanying vinyl release was expected. The new songs are described as “a powerful selection of Black Metal style classics, which as a treat to the fans.”

The EP will be released by Spinefarm Records / UMG, and will feature 3 brand new songs. On how songs were chosen for the EP, frontman/bassist Cronos said: “we put 10 new song titles in a hat, thus leaving the choices in the lap of the gods.”

Venom released their fourteenth studio album, From The Very Depths, on January 25, 2015 via Spinefarm.

Previous: Lorde 2017 Australia/New Zealand Tour, Tickets, Dates
Next: The Weepies “No Trouble” Full In Bloom Song Of The Week