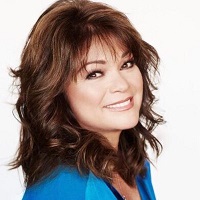 Valerie Bertinelli:  “”Jump” (embedded below) came on the radio and I just realized, as great as it is, it’s not really a sing-a-long song.  What makes it so memorable and fun, is the music.  We all know Ed (Van Halen) is a genius guitarist, but what I’m trying to say is, my ex was a ridiculously underrated songwriter. #myopinion”

When Van Halen released “Jump” as a lead single on December 21, 1983, it soon shot up to #1 in the United States on the Billboard 200. The track was taken from their multi-platinum album 1984, which was released on January 9, 1984. Unlike typical Van Halen songs, “Jump” relied heavily on keyboards – played by Eddie Van Halen (on an Oberheim OB-Xa). It is the band’s most successful single to date, selling over one million copies in the U.S. alone.