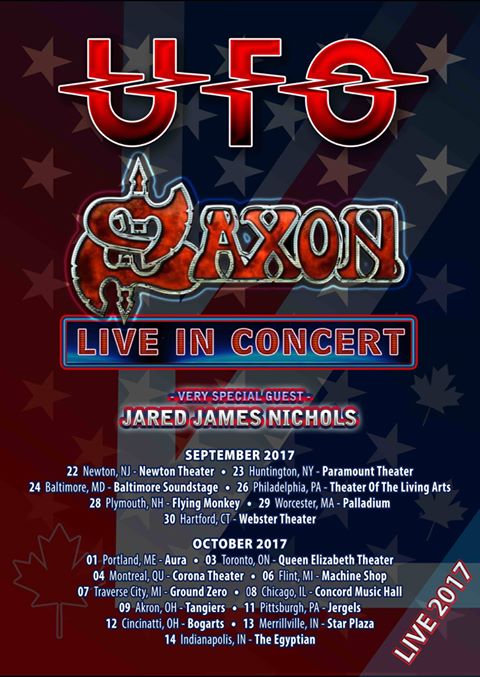 Hard Rock Icons UFO & SAXON are back in the USA. Due to demand following their hugely successful tour together in March & April, UFO & SAXON have announced more dates in the US, plus two in Canada, in September & October.

SAXON are touring on their latest release “Battering Ram” together with the new live DVD “Let Me Feel Your Power”, both on the UDR label & are currently in the studio working on a new studio album for release early 2018. Saxon are: Biff Byford (Vocals), Paul Quinn (Guitar), Nigel Glockler (Drums), Doug Scarrett (Guitar) and Tim “Nibbs” Carter (Bass).

Phil Mogg comments: “Seldom do you get the chance to have a tour with such great bands and great personalities.
We have been offered such a chance and will be grabbing it with both hands. We are looking forward very much to our autumn tour with the lads from Saxon, Biff, Paul, Doug, Nigel, and Nibbs, Jared James, Eric & Dennis, just so you know every one. I hope you enjoy these gigs as much as we will, rocking/kicking, your proverbial arse/bottom. Love UFO.”

Biff Byford from Saxon adds “It’s great to be coming back with UFO, we had such a great time on the last tour – it’s a great package with three great bands, what’s not to like BRING IT ON !!!!!”

Special Guests on all shows is Jared James Nichols