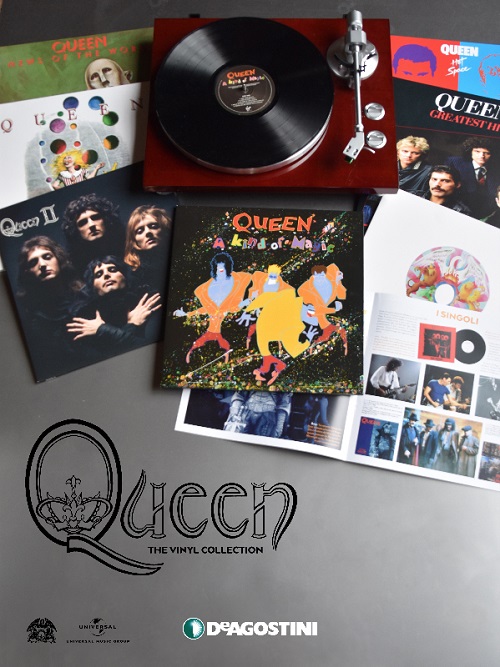 On 24th February 2018, global partwork publisher DeAgostini is launching, in association with Queen Productions Ltd. and Universal Music Group, Queen The Vinyl Collection. Featuring 25 albums, it will be available to purchase online (for Italy only) and in newsagents all across Italy.

Issue by issue, Queen The Vinyl Collection, made up of single, double and triple albums, builds into a career-spanning library of Queen’s historic album discography. With artwork overseen and designed by Queen’s art director Richard Gray, each album is presented in high-quality sleeves reprising and, in some cases, refreshing the original artwork. The specially pressed LPs appear on 180g black vinyl, with all titles half-speed mastered and cut at world-renowned Abbey Road Studios in London to achieve audiophile quality sound.

The collection spans the band’s career from their self-titled debut album, released in 1973, through 1995’s Made In Heaven, which comprises of Freddie’s final studio recordings and additional material from the band’s earlier studio sessions. In addition to Queen’s 15 studio albums, Queen The Vinyl Collection features all three classic Greatest Hits titles (including the currently unavailable Greatest Hits III), and On Air, a collection of the band’s BBC Radio recordings. The collection is completed with six live concert albums, among them the long out-of-print Live Killers and a brand new presentation of Live At Wembley Stadium, on triple LP for the first time.

Each album is accompanied by an illustrated 8-page magazine containing the stories behind the group’s renowned recordings. With notes by Queen archivist and writer Greg Brooks (in consultation with Queen publicist Phil Symes and longtime expert fan Jim Jenkins), each issue reveals fascinating details about the creation of the album, including the poignant recording sessions for the last two albums with Freddie, and the key tracks therein, and features quotes and insights from all four members of the band, as well as rare photos, record sleeves and poster art.

Queen The Vinyl Collection is a 25 part series available in Italy. Issue one will be priced at €9.99 for a limited time only, with subsequent single album copies retailing at €17.99; double albums at €24.99; and triple albums at €29.99. Issues are available bi-monthly in newsagents across Italy, with subscribers receiving two issues in one delivery every four weeks. Subscriptions can be purchased online at at this location.