Tracii Guns Talks About His Time in Guns N’ Roses 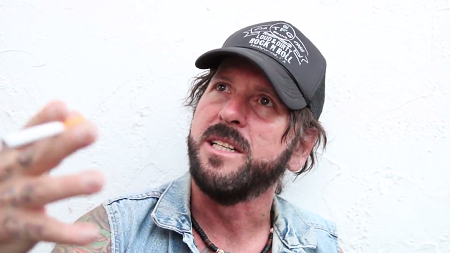 The new record, The Missing Peace, is killer. How did it come together? —Mike Holloway

Well, the greatest thing about not doing new L.A. Guns music for over 10 years was being able to look at what L.A. Guns really is, musically. And the strongest element of L.A. Guns is that sleaze/hair metal kind of dark thing that we did. Taking some elements of punk rock and mixing them with classic rock and speeding all that shit up. Then we also had great success with songs like “Over the Edge,” that are more kind of epic in feel. So songs on the new record like “It’s All the Same to Me” and “Speed,” those are classic L.A. Guns. “Speed” was actually something I had in a folder on my computer called “Bad Eighties Riff.” And I thought, What’s “Bad Eighties Riff”? And I opened it up and I went, “Wow, this is ‘Badass Eighties Riff’!” But, you know, at the time I wrote it I was probably just nauseated by the whole situation and put it away. But I’m glad I listened to it, because “Speed” is a damn fine representation of L.A. Guns.
And then Michael [Grant] wrote “Don’t Bring a Knife to a Gunfight” and “The Devil Made Me Do It,” and Johnny [Martin, bass] wrote the music for “Baby Gotta Fever,” which is a perfect representation of that L.A. Guns snotty riff-rock thing. Then “Kill It or Die,” “A Drop of Bleach,” they’re kind of like Hollywood Vampires-era L.A. Guns. And at the end of the record there’s some really big classical-influenced pieces of music that I actually originally wrote for Quiet Riot in 2005. So I just put everything together and we took it from there.

You helped form Guns N’ Roses in the mid Eighties. How did you first meet Axl Rose?
—Jordana Colvan

I first met Axl from Izzy [Stradlin]. Izzy always told me, “Yeah, you know, I have this buddy in Indiana. He can really sing. I’m gonna bring him out here.” Izzy was living at my mom’s house. I was about 16 or 17 and he was about 19 or 20. And so eventually Axl came out and they put together, I think it was probably Hollywood Rose. And then L.A. Guns and Hollywood Rose and Poison did a show—our first show—together at Madame Wong’s West. Poison played upstairs in the big room and L.A. Guns and Hollywood Rose played in the small room downstairs and that was really the first day I heard Axl sing. It was at soundcheck. And I was like, “Holy shit!” He was incredible. We became friends after that, and within the next six months he ended up singing for L.A. Guns. And we eventually changed that into Guns N’ Roses. I was in that version of Guns N’ Roses for about eight months and then I took off to do L.A. Guns again.

L.A. Guns released their eleventh studio album, The Missing Peace, on October 13, 2017. It was the first album of new material featuring both singer Phil Lewis and Tracii Guns in 15 years.