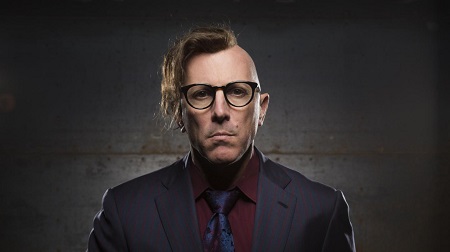 “If life gives you lemons, fuck lemonade. Make lemon jello and lemon meringue pie and plant one of those fucking lemon seeds and grow another fucking tree to get lemon trees, and you can get drunk under the tree if you want.”

Noisey: Was writing this book especially challenging just given how fiercely private you’ve always been?

Maynard James Keenan: Yeah. I think that there’s a weird … I don’t know if weird is the right word for it. There’s an imbalance with celebrity worship, I think. It will probably take a couple of scholars to kind of trace whatever that is and however that works. Probably trace it back to Hollywood or something, I don’t know. Like anything, it all comes back to money or power or something. It’s just out of balance. I feel like, in order to kind of just let your work speak for itself, you kind of have to remove a little bit of the celebrity personality. You can still be an asshole. You can still be a kind person. You can still be all of those things behind the scenes, as an artist. If you let the personality part run it, then whatever you’re getting done is compromised, I feel.

Noisey: That idea of self-reliance seems to be a common thread throughout the book. Is that something you’ve always had, or was it something shaped by experience?

Keenan: Go back to caveman days. When you couldn’t get that rock up on the top of that other rock, and you didn’t have anybody around to help you put the rock up there, you figured out a way. If you really needed to get that rock up there. Our creative side is what drives us. That need to survive. Not that I run around taking Tony Robbins courses or anything like that, but there’s a great one online recently where he was like, “Most people, when given the choice of life or death, tend to choose life.” If you’re just going along, trying to get to the island, and you’re just kind of coasting in the boat, get the fuck out of the boat.

You’re either going to drown, or you’re going to live. So get the fuck out of the boat and get to the island by dying or living. I guess somewhere early on, there’s a lot of people that whether they wanted to get out of the boat or not, were out of the fucking boat. They had to make that choice. Again, I don’t know the scenario that it would have been for me. It’s hard to maintain that objectivity. I don’t know if it came before then or after then. I really don’t know. That moment happens for some people, and they just realize “I need to be self-reliant”. I can, and I’ve gotten to the point where, over the years, I have been self-reliant, and I’ve thankfully been able to do that with talented people around me who are also self-reliant.

Noisey: Were certain memories or experiences difficult but necessary in a way for you to revisit?

Keenan: Yeah, I’m sure there were things that I had to generalize. The last thing I wanted to do was for this to be dirty laundry or some rock star expose or any of that crap. That’s not really what we wanted to do. Yeah, there’s some dark shit that happens to people, and you’ve got to figure out. Just empower people to say, “If life gives you lemons, fuck lemonade. Make lemon jello and lemon meringue pie and plant one of those fucking lemon seeds and grow another fucking tree to get lemon trees, and you can get drunk under the tree if you want.” There are all these thing you can do.

Noisey: Which goes back to the whole idea of self-reliance. Of course, your four-year stint in the military probably helped enforce that perspective in you as well.

Keenan: I think those years are an important part of the equation. Understanding structure and discipline, to be able to draw a line and know where the line started and where it’s going, and having the ability to predict it a little bit. And really being able to think outside of the box in general. It’s a strange phenomenon for me when people think that there is a complete division between that warrior spirit and actual artist spirit. I think with self-discipline those things can be absolutely in balance because think about it. Like, at what point in our stage of development did we figure out how to take a stick, put a string on it, and put a sharper stick on it and fling it 100 yards away and get lunch? How wonderful was that idea? That’s a warrior. That’s a killer. That’s what that thing is, but it had to start with the creative part of the mind. That was an artist that made that leap to figure that out and put it together. They’re inseparable.