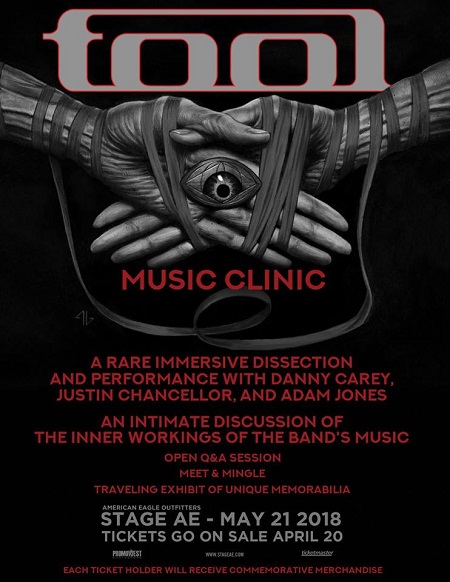 Tool, one of rock music’s most mysterious and speculated about bands, give fans a rare glimpse behind-the-scenes via a series of intimate music clinics.

The discussions with drummer Danny Carey, bass player Justin Chancellor and guitar player Adam Jones include live performances of a handful of the band’s songs, walking attendees through the process of writing them. Audience members are encouraged to ask questions via an open discussion, as well as mingle with the band following the session.

Ticket holders will receive commemorative merchandise, exclusive to the series of events and limited to the number of people in attendance. An accompanying, traveling exhibit will be on display at each event, featuring unique items from Tool’s history.

Wednesday, May 23: Philadelphia, PA @ The Fillmore
GET TICKETS

A limited number of tickets have been set aside for Tool Army members, which are AVAILABLE NOW (WEDNESDAY, APRIL 18 at 10:00 AM ET via the band’s webstore.