VWMusic: Former Black ‘N Blue, and current KISS lead guitarist Tommy Thayer, and I peel back on the onion on the history and soon-to-be triumphant release of these once Lost Tapes. You can read the entire interview @ this location.

Digging into the most recent news at hand now, the Thayer-St. James The Lost Tapes has just been announced. First and foremost, how did these recordings surface once again? Did your recent KISS Kruise appearance in 2021 with Black ‘N Blue ignite some nostalgia?

Jaime (St. James) and I have always been close friends, but it was right after the Kruise that Jaime called and said “Hey, do you remember those five songs from the tapes you sent me last year? When’s the last time you heard them?” 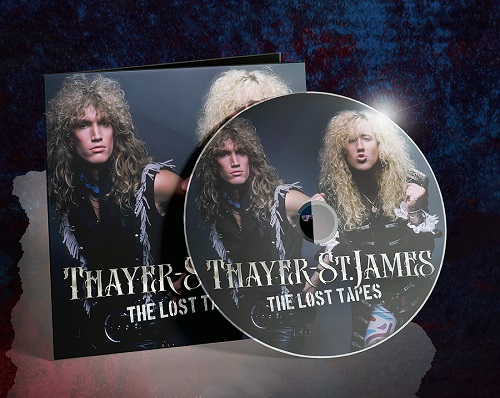 In my chats with both yourself and Jaime, I’ve learned that in the wake of In Heat, the two of you had begun writing and demoing the next set of tracks for what would have been Black ‘N Blue’s fifth album. Are these the results of those early sessions, or do these tracks date back even further?

That’s exactly right. They were written around the time we recorded them, not before. In late 1988, our label had released us, and Jaime and I had some new songs that we wrote and demoed. We thought another label might want Black ‘N Blue, or we could possibly start a new band, we didn’t know.

I had the original 2-inch/24-track tapes and 1/2-inch master mixtapes in my attic storage. When I moved to Vegas in 2020, I was going through all my stuff and trying to get rid of what I didn’t really need. Over the years I’d accumulated so much stuff. I called Jaime and asked if he wanted these old tapes and he said, “Of course.” After he got the tapes, Jaime called and said, “We should think about putting these five songs out.” He said, “They’re cool, never released songs from the late-80s era, and they should be heard and enjoyed instead of hidden away in a box forever.” I thought, “Yeah, he’s right, that’s a great idea.”

On a possible Black ‘n Blue reunion following the ‘End of the Road Tour’:

Previous: Anthrax ‘XL’ + “Aftershock” LIVE VIDEO – 40TH ANNIVERSARY LIVESTREAM CONCERT ON BLU-RAY AND DIGITAL – 2022
Next: Wolf Van Halen on Upcoming ‘Autopsy: The Last Hours of EDDIE VAN HALEN’: ‘F’ REELZ, ‘F’ everyone that works on this show, and ‘F’ you if you watch it – 2022