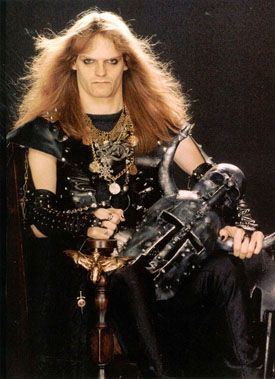 Triptykon’s Thomas Gabriel Fischer recently opened up about his days fronting the Swiss extreme metal band Celtic Frost. Fischer, then known as Tom Warrior, lead Celtic Frost through five albums between 1984 and 1990 before they disbanded. Although unaware at the time, the band’s influence on various forms of metal, including thrash metal, black metal and death metal is undeniable. “We were too young and too involved to see the greater context of anything,” says Fischer. “We didn’t really think of creating anything pioneering or modern.”

Asked about his unique guitar style, Fischer told Guitar World:
“It is a completely different approach to guitar playing. I stood there as the young Tom Warrior, with these raging feelings inside of me, of having been an outcast, having experienced violence, having experienced a difficult youth, being completely ignored by the Swiss scene at the time, all of these things—I stood there in our stinky rehearsal room in front of my Marshall, trying to express these feelings.

“I was standing there on my own, trying to figure it out, learning step by step how to do this feedback, how to do this tone, how to express what was inside of me. So that’s a completely different approach than if I’d paid somebody 50 bucks to teach me for two hours where to find these notes, you know?”

On Celtic Frost’s classic albums, 1984’s Morbid Tales, 1985’s To Mega Therion, 1987’s Into the Pandemonium and 1990’s Vanity/Nemesis—which have recently been reissued in deluxe CD and vinyl editions by BMG/Noise:
“These albums are all deeply flawed,” says Fischer. “But looking back at them now, I think that’s exactly what makes them so unique. They’re not perfect, run-of-the-mill products…they are experimental albums, and in many aspects they fail; but in a way, that’s a part of it. We were exploring things, and if you explore things, you sometimes have to take the risk of failing. And of course, Celtic Frost failed many times, but I wouldn’t change a thing. I think I learned as much from the failures as I learned from the successes, and it would be way too simplistic and too pretentious for me to just look at the good sides.” 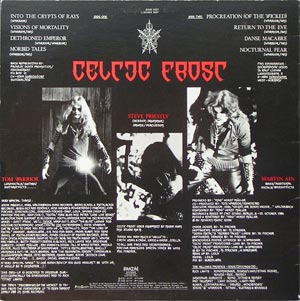 “Our only official record at the time, the Hellhammer EP, was criticized heavily by the record company and by the press of the day as being a muddy production, limited technical capabilities, and so on,” Fischer recalls.

“With the ears of the time, at a time when bands strove to have vocalists like Ronnie James Dio, we agreed with these criticisms—we could see where they were coming from. So we abandoned Hellhammer, and we created a new band and recorded Morbid Tales in an attempt to not be dropped by the record company. The album was deeply, deeply personal, and actually a very desperate undertaking, where we put every ounce of our energy into something, because we could only see up to that album; we didn’t have a horizon beyond that. Because we really didn’t know whether we could pull it off…

“We had spent years in a mildewed, wet, stinky, underground rehearsal room—an old bunker—dreaming of attaining a record deal, being fanatical metal fans, literally playing every single day, much more than any other Swiss band that we knew. And then we had attained a record deal, which was the fulfillment of our teenage dreams, and of course we wanted to keep that. We knew our first record with Hellhammer was flawed, and we wanted to show that we were not blind, and that we could actually progress as musicians. And we were desperate not to end back up in that rehearsal room without a record deal. And I think you can hear that fervent energy, that desperation, that determination, that energy in Morbid Tales.” 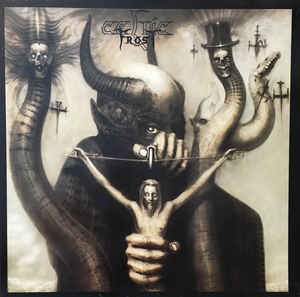 “We left the ordinary society, grew our hair, dressed differently and played music that everybody hated exactly because we didn’t want to be limited. We hated these mechanisms in society where idiots tell you what to do—and then, as soon as you are in a metal band, you are being told what to do? No, not Celtic Frost. I had listened to Emerson, Lake and Palmer or Deep Purple in concert, or early Roxy Music, and I loved the combination of classical instruments with rock music. And I was wondering if we could combine that with extreme metal, and that’s why we did this—even though some people said, ‘You cannot do that, you should not do that, it’s wimpy, blah blah blah.’ Even back then, we simply refused to be contained… 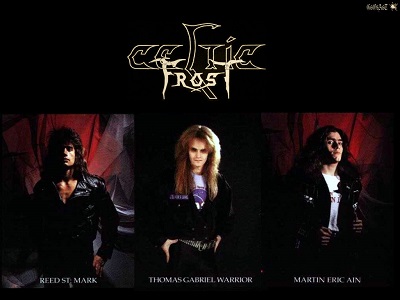 “Martin and I were fanatical metalheads” Fischer explains. “But at the same time, we loved music. Martin came as a huge fan of what was then called new wave—bands such as Bauhaus, Sisters of Mercy, Siouxsie and the Banshees, Joy Division, what have you. I loved that music, too, and in addition I loved jazz music, I loved classical music, I loved experimental rock music, and so on. And when the two of us combined all this, and then we found a drummer like Reed St. Mark, who also came from a jazz background, a Latino background, and so on—the creativity in the band was limitless. And we wanted to use that!

“But when it came to the Into the Pandemonium album, the record company actively tried to prevent us from doing this. They threatened to shut down the production, and they told us literally to record an album like Slayer or Exodus. They said, ‘That’s what’s selling. What you’re doing will not sell a single copy!’ Nowadays, every metal band has worked with classical instruments, with female singers; there’s tons of gothic metal bands, it’s a household thing. Back then, it was completely unheard of, and everybody tried to stop us. Nobody could see the merit in it. And also, we didn’t only have to fight objections; we also had to fight inexperience.

“The engineers had only recorded thrash metal, bands like Sodom or Destruction; they didn’t have any experience in how to record a horn or cello. So it was experimentation every step of the way, and it was the overcoming of all kinds of obstacles every step of the way. It wasn’t very easy to create these albums, but I think that, too, adds to the reality, the desperation, and the emotions you hear on the albums.”

Make sure to read the entire interview at this location.